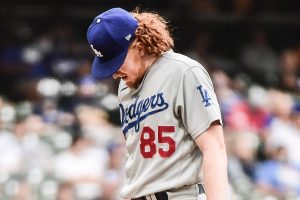 The defending World Series champion Los Angeles Dodgers looked indomitable on paper and started the 2021 season looking the part, winning 13 of their first 15 games while flexing their unmatched depth.

Yet as their losses on the field have mounted, that depth has been thinned by injury – including a season-ending blow to an emerging force.

Right-hander Dustin May will undergo Tommy John surgery on May 11, the Dodgers announced Monday, sidelining their hardest-throwing starter for this year and most of 2022.

May, 23, exited his Saturday start complaining of elbow pain and an MRI revealed damage to his ulnar collateral ligament, which will be repaired by orthopedist Neal ElAttrache. That will end a season where May looked ready to fulfill long-awaited expectations: He'd struck out 35 batters in 23 innings and posted a 0.96 WHIP.

YANKEES-ASTROS: Houston makes its first trip to Bronx since scandal

His average fastball velocity of 98.4 mph was second only to Mets ace Jacob deGrom's 98.9 among major leaguers with at least 20 innings pitched.

But like deGrom and many other hard throwers, May will have a significant detour early in his career to repair a frayed elbow.

That puts him on the injured list alongside veteran David Price, who began the year working out of the bullpen but injured his hamstring, thinning a pool of potential Dodgers starters that ran seven to nine deep to start the year.