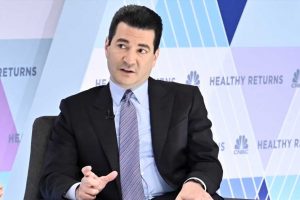 Dr. Scott Gottlieb told CNBC on Thursday the current spike in Covid infections due to the highly contagious delta variant may be over sooner than many experts believe.

However, the former FDA chief urged Americans to take precautions in the meantime as delta, first found in India, takes hold as the dominant variant in the U.S.

"I think the bottom line is we're going to see continued growth, at least in the next three to four weeks. There's going to be a peak sometime probably around late August, early September," Gottlieb said on "Squawk Box." "I happen to believe that we're further into this delta wave than we're measuring so this may be over sooner than we think. But we don't really know because we're not doing a lot of testing now either."

There may be another small bump in infection rates as schools reopen in the fall and become "vectors of transmission" as they did with the B.1.1.7 variant, first discovered in Britain, and now called alpha, said Gottlieb, who led the Food and Drug Administration from 2017 to 2019 during Donald Trump's presidency.

Gottlieb also warned that just wearing masks, particularly cloth masks, may not enough to prevent Covid infections from the delta variant in classrooms. He advised schools to create pods, space out children in the classroom, avoid group meals and suspend certain large activities, as well as improve air filtration and quality levels.

"There might be other things you do that actually achieve more risk reduction than the masks in the setting of a much more contagious variant where we know there's going to be spread even with masks," Gottlieb said. "If we're going to tell people to wear masks, I do think we need to start educating people better about quality of masks and the differences in terms of the reduction and risk you're achieving with different kinds of masks."

For businesses wanting to bring people back into offices, Gottlieb said that October may be a more "prudent" time than September.

Gottlieb, who serves on the board of Covid vaccine maker Pfizer, said the critical question right now is how likely vaccinated people are to transmit the virus if they become infected. He said the Centers for Disease Control and Prevention should be collecting that data because it's likely the current delta variant may be the newer, more permanent form of coronavirus going forward.

"When you're dealing with a new variant where the virus levels that you achieve early in the course of your infection are thousandfold the original strain, it's possible that you're shedding more virus and you could be more contagious," he said.

Local officials across the country are advising and reimposing indoor mask mandates as the highly transmissible delta variant causes Covid cases and deaths to increase again in the U.S., particularly in largely unvaccinated communities.

Nearly 162 million people in the U.S. are fully vaccinated — almost 49% of the nation's population — even as the rate of daily administered shots has seen a sharp dip in recent months, according to a CDC tracker.

The CDC eased its Covid guidelines on masks for fully vaccinated people on May 13.

Europe's travel industry is on a knife edge as Covid surges, again

Since delta has taken a stronger hold, however, health experts are cautioning people to again use masks and follow public health measures. White House chief medical advisor Dr. Anthony Fauci told CNBC on Wednesday that even fully vaccinated people may want to consider wearing masks indoors as a protective measure against the delta variant.

Last week, Gottlieb told CNBC that he believes the U.S. is "vastly underestimating" the number of Covid delta infections, particularly among vaccinated people with mild symptoms, making it harder to understand if the variant is causing higher-than-expected hospitalization and death rates.

"The endgame here was always going to be a final wave of infection," Gottlieb told CNBC on Thursday. "We had anticipated that this summer would be relatively quiet and we'd have a surge of infections in the fall with B.1.1.7, and that would be sort of the final wave of the pandemic phase of this virus and we would enter a more endemic phase where this virus just becomes a fact of life and it circulates at a certain level."

But unlike the early last year, he added, "We have therapeutics and vaccines to deal with it, we're better at treating it and it becomes sort of like a second flu."