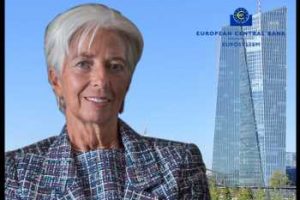 European Central Bank President Christine Lagarde said Monday that it was possible that the euro area inflation could become stronger, but the risks of such a scenario were limited.

“While inflation could prove weaker than foreseen if economic activity were to be affected by a renewed tightening of restrictions, there are some factors that could lead to stronger price pressures than are currently expected,” Lagarde said at a virtual hearing of the European Parliament.

“But we are seeing limited signs of this risk so far, which means that our baseline scenario continues to foresee inflation remaining below our target over the medium term,” Lagarde added.

Early this month, the ECB raised the headline inflation projection for this year to 2.2 percent and the outlook for next year was lifted to 1.7 percent. The projection for 2023 was raised to 1.5 percent.

Lagarde said the recent increase in underlying price pressures is consistent with the opening up of the economy, which remains some distance away from operating at full capacity.

In September, the ECB decided to slow the pace of its emergency asset purchases, which were launched last year to support the economy amid the Covid-19 crisis, as policymakers worry higher inflation may last long.

Elsewhere on Monday, ECB policymaker Mario Centeno told CNBC that the central bank need to be “very conservative” in the way it deals with higher inflation so as not to repeat past mistakes.

The Portuguese central banker said the economy was not out of the woods yet and it was essential to maintain favorable financing conditions to all sectors.