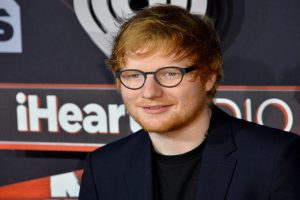 Ed Sheeran is back and showing off some “Bad Habits.”

The 30-year-old singer dropped his new single “Bad Habits” at midnight Friday, along with an accompanying music video that shows the “Shape of You” crooner embracing an edgier, more bloodthirsty look.

In the video, Sheeran takes on the role of a dapper vampire, complete with a bright pink suit jacket, glittery dark eye makeup and some pointy chompers. The video follows Sheeran and his back of fellow vampires as they wreak havoc on a shopping center.

“My bad habits lead to late nights, endin’ alone,” Sheeran sings. “Conversations with a stranger I barely know / Swearin’ this’ll be the last but it probably won’t / I got nothin’ left to lose, or use, or do”

On June 16, Sheeran teased the song’s release in an eerie short video, which showed him skulking down at night alongside some fellow vampires. In an Instagram reel Wednesday, the singer gave fans a glimpse from behind-the-scenes of the music video, as he prepared to shoot a scene that involved jumping from a high place.

“I’m terrified of heights, and I’m about to jump off a roof, which I don’t really know how I’ve been talked into, but here we are,” he said.

“Bad Habits” has garnered praise on Twitter, with many users complimenting the singer’s look.

“ED WAS BORN TO BE A VAMPIRE” wrote @clausosaD.

“Bad Habits” is Sheeran’s first new song since his surprise release of “Afterglow” in late December. The singer dubbed “Afterglow” a “Christmas present” at the time and said the song stands apart from his upcoming album.

In September, Sheeran announced on Instagram that he and his wife Cherry Seaborn welcomed a baby girl, Lyra Antarctica Seaborn Sheeran. The couple have known each other since childhood and attended high school together.