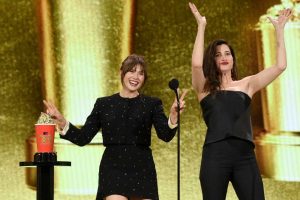 Grab your (golden) popcorn! The MTV Movie & TV Awards returned Sunday (after taking a break in 2020 due to the COVID-19 pandemic) – and it was a jam-packed night.

Marvel scored big tonight! “WandaVision” took home four out the five awards it was nominated for, including Best Show, Best Performance in a Show from its titular character played by Elizabeth Olsen, Best Villain and Best Fight. “The Falcon and the Winter Soldier,” starring Sebastian Stan – who was not in attendance tonight – and Anthony Mackie, won two awards for Best Hero (Mackie) and Best Duo.

The late Chadwick Boseman was awarded Best Performance in a Movie for his role in “Ma Rainey’s Black Bottom” and received a standing ovation for his posthumous win.

“I’m so honored to accept this award on behalf of Chadwick Boseman,” Yara Shahidi said on stage, after announcing one of the final categories of the night. “I know I speak for myself, his legion of fans, and the communities he so beautifully represented when I say we are honored to celebrate his art today and every day.”

“Coming 2 America” actress Leslie Jones took the stage Sunday as host of the live event and rocked various fashion looks throughout the night, most notably a statement T-shirt that read, “You have to choose joy.”

Sacha Baron Cohen became the fourth person to receive the Comedic Genius Award, and Academy Award-nominated actress Scarlett Johansson was honored with the Generation Award. (She also got slimed by husband Colin Jost during her acceptance speech).

The awards, which started in 1992, moved to a two-night event this year.  Sunday’s traditional broadcast will be followed by the inaugural “MTV Movie & TV Awards: Unscripted” Monday, honoring reality television.

See all the nominees and winners:

“Judas and the Black Messiah”

WINNER: “To All the Boys: Always and Forever”

Best performance in a movie

Sacha Baron Cohen, “The Trial of the Chicago 7”