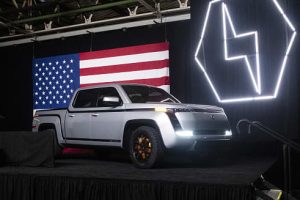 Lordstown Motors' stock hit a new 52-week low Thursday, dropping below $5 a share for the first time ever, following an annual shareholder meeting that lasted about 10 minutes.

Shares of the embattled electric vehicle start-up were down by as much as 5.5% immediately following the noon meeting, before dropping further during trading early afternoon to $4.92 a share, down 6.6%. The stock is down about 75% in 2021. The shares rebounded somewhat in afternoon trading

A company spokeswoman confirmed Lordstown Chairwoman Angela Strand reiterated many of the company's previously announced plans during the meeting, but did not provide any new information. Most importantly, she said limited production of its Endurance EV pickup truck beginning next month, followed by vehicle validation and regulatory approval in December or January.

Two resolutions – the appointments of KPMG as an independent accounting firm and two board directors – passed, according to a spokeswoman for the company. Voting results were not immediately available.

The new low for the shares comes about a month after Lordstown confirmed a Justice Department probe. Federal prosecutors are looking at the company's SPAC deal that brought the company public last year as well as its reporting of preorders, the company has confirmed. The Securities and Exchange Commission its own inquiry into the company and some comments made by executives, including former Chairman and CEO Steve Burns.

Burns and his CFO left the SPAC-backed company after an internal investigation found "issues regarding the accuracy of certain statements" around Lordstown's preorders, specifically the seriousness of the orders and who was making them.

In May, short seller Hindenburg Research claimed the company misled investors, including using "fake" orders to raise capital for its Endurance electric pickup. The short seller also said the pickup was years away from production. Lordstown has maintained it's on track to start making the vehicle in September.

Lordstown went public through a special purpose acquisition company, or SPAC, in October. It is among a growing group of EV start-ups to go public or announce plans to do so with SPACs.

Most of the SPAC deals were initially celebrated by investors, sending shares through the roof and making some founders millionaires, if not billionaires, overnight. But the tides have turned against many of the companies after crackdowns this year by the SEC, including investigations, warnings to investors and potential changes to accounting guidelines.