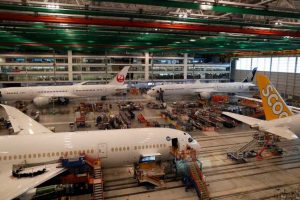 The Federal Aviation Administration on Monday said Boeing will fix another manufacturing defect that was discovered on some of its 787 Dreamliner planes that haven't yet been delivered to customers.

Boeing halted deliveries of the wide-body planes in May for the second time in a year as the FAA reviewed the manufacturer's method for evaluating the aircraft. Boeing first disclosed incorrect spacing in some parts of certain 787 aircraft, including the fuselage, last year, halting deliveries for five months.

The FAA said the latest issue was detected "near the nose" of certain 787 Dreamliners that Boeing has manufactured but not delivered.

"This issue was discovered as part of the ongoing system-wide inspection of Boeing's 787 shimming processes required by the FAA," the agency said. The FAA's comments were reported earlier by Reuters.

"Although the issue poses no immediate threat to flight safety, Boeing has committed to fix these airplanes before resuming deliveries," the FAA said.

Boeing didn't immediately respond to a request for comment and it wasn't yet clear how long the process could take. The company has roughly 100 Dreamliners that haven't yet been delivered.

The majority of an aircraft's price is paid when they are delivered to customers, so further delays could mean more financial strain for Boeing, which is trying to regain its footing after two fatal crashes grounded its best-selling 737 Max and the impact of the coronavirus pandemic.

"Based on data, the FAA will determine whether similar modifications should be made on 787s already in commercial service," the FAA said.