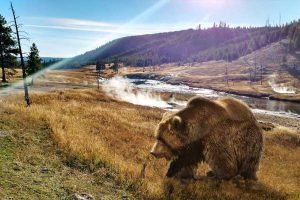 The claim: There’s an area of Yellowstone National Park where you could theoretically escape conviction for murder

Starting in 2005, something unusual happened: a legal theory became part of popular culture. It was covered by The Washington Post, NPR, The BBC; it inspired a thriller novel, called “Free Fire,” by New York Times bestselling author C.J. Box; and it was the subject of an episode of The Atlantic’s podcast “The Experiment.”

The theory: There is a 50-square-mile region in Yellowstone National Park where sloppy district boundaries would make the prosecution of serious criminal offenses unconstitutional — in other words, a region where one could get away with murder.

“If you committed a crime within the zone, there could be no jury because nobody lives there, a trial would be impossible, and, therefore, you could not be convicted,” the post claims.

USA TODAY reached out to the poster for comment.

Yellowstone National Park is home to Old Faithful and spans over Wyoming and parts of Montana and Idaho. (Photo: Dara Fazel, Your Take)

Brian Kalt, an associate professor of law at Michigan State University, published the theory in the Georgetown Law Journal and uploaded his paper to the popular Social Science Research Network, where it accrued thousands of downloads.

Kalt identified a “zone of death,” a roughly 50-square-mile uninhabited region of Yellowstone National Park where no strictly constitutional trial by jury could be held.

Most of Yellowstone is in Wyoming, but the park’s northern boundary is in Montana and western edge is in Idaho. The federal government has exclusive jurisdiction in Yellowstone, and it put the entire park in the District of Wyoming, despite the fact that the national park spans three states.

This becomes a problem, Kalt argues, because of the “vicinage clause” of the Sixth Amendment, which states members of a jury must be from both “the State and district wherein the crime shall have been committed.”

Typically, jurors for a court case can be drawn from a large pool, because a federal district’s boundaries match the boundaries of the state, as is the case in Wyoming, or a state has multiple federal districts designated within it, like, California. But the only place where one could live both in Idaho and within the District of Wyoming is in Yellowstone.

The court would have to draw jurors from within the tiny, mountainous region to satisfy the vicinage clause — and no one lives there.

No jurors would mean no jury, which would violate criminal defendants’ right to a trial by jury, enshrined in Article III, Section 2 of the Constitution. And thus, some argue, no trial could occur, and, logically, no conviction.

Yellowstone National Park, located primarily in Wyoming, draws in millions of visitors every year and is one of the most popular tourist destinations in the United States. (Photo: tiny-al / iStock via Getty Images)

One case provides a guidepost – in a different direction

No crimes in the “zone of death” have ever been prosecuted; however, one case, explained in “The Experiment” podcast, suggests a judge might not allow  a suspected murderer or other criminal defendant to go free because of the unique jurisdictional and geographic situation at Yellowstone.

In December 2005, Mike Belderrain illegally shot an elk in the small slice of Yellowstone that is in Montana. Belderrain’s defense, apparently inspired by Kalt’s theory, argued that the case could not be pursued unless he were given a trial with a jury drawn from the Montana residents of the park. There are enough residents that this would technically be possible, but it would be very difficult.

The judge denied his request for such a jury, however, stating that any crime committed in Yellowstone should be tried in the state of Wyoming, with a jury chosen from Wyoming residents.

Notwithstanding Kalt’s theory, the judge’s ruling suggests that a jury trial in a prosecution for a crime committed in the “zone of death” would be held in the District of Wyoming.

In the end, though, Belderrain took a plea deal: on the condition that he would not appeal the case based on the loophole, he received a sentence of four years rather than the seven-year sentence he would likely have received in a trial by jury.

Even if Kalt’s theory were to be upheld in court, there are other complications that the Instagram post does not note, many of which he acknowledges in his original paper.

Only “serious” offenses — offenses that carry a potential sentence of more than six months —  entail the right to trial by jury. Petty offenses include traffic infractions and some kinds of low-level assaults. And the victim of a crime could still file a civil suit.

We rate this post MISSING CONTEXT. As the post states, it is true that there is an area of around 50 square miles in the Idaho portion of Yellowstone National Park where a crime such as murder could theoretically escape conviction. But, no crime committed in the “zone of death” has ever been prosecuted and one case raising the legal issues highlighted by Kalt suggests any such trial would be held in Wyoming, notwithstanding the constitutional issues Kalt has explicated.