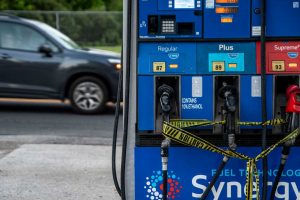 As fear about a fuel shortage spread following the news of the Colonial Pipeline ransomware attack, so did photos showing the lengths some people would supposedly go to stock up on gasoline.

In one viral photo, one person stands at the gas pump filling a red gas can while another tends to more cans in the back of a white vehicle. Three gas cans already are on the ground outside the vehicle, the photo shows, and four more can be seen inside.

The photo was set at an Alabama gas station, but it spread nationally. It has been shared hundreds of times on social media since May 10, including the original post on Facebook. It even drew attention from North Carolina Attorney General Josh Stein, who posted the photo on Twitter to discourage hoarding.

The Colonial Pipeline ransomware attack on May 7 caused a shutdown and has stoked fears about the availability of fuel along the East Coast and into the South. Panicked drivers bought out stations in North Carolina and Virginia, and outages extended into Georgia, Florida and South Carolina as well, according to CNN.

But did the viral photo — one of several spreading across social media — really show a couple stocking up on fuel amid the panic buying that followed news of the attack?

In interviews with USA TODAY, the owner of the Alabama gas station where the photo was taken confirmed the location, and the original photographer shared a screen recording that shows the time and location it was taken.

“That thing went absolutely crazy,” Anthony King, who owns the Cenergy gas stations in southern Alabama, said of the photo.

Mike Mcleod told USA TODAY that he and his wife were on their way out of town on May 11 when he snapped the photo at a Cenergy gas station in Andalusia, Alabama.

The gas station wasn’t busy at the time, but Mcleod said he noticed the couple filling gas cans in his rearview mirror while his wife was inside buying a drink. He turned to snap the photo and posted it on Facebook shortly after.

“It was really unsafe what they were doing,” said Mcleod, 44, of Andalusia.

Mcleod provided USA TODAY with a screen recording showing the time and location data for the photo. King confirmed the photo, which includes a Cenergy banner on top of a pump in the background, showed his station at 13759 Brooklyn Road.

The station is one of three King owns in Alabama’s Covington County, near Alabama’s border with the Florida Panhandle.

Gas for those stations comes from a different pipeline, but King said panic buying began after news about the ransomware attack on the Colonial Pipeline spread. The station on Brooklyn Road ran out of gas the same night Mcleod posted the photo but was resupplied by the next morning, King said.

The region is used to supply interruptions, he said, because of its proximity to hurricanes  coming off the Gulf of Mexico.

“Monday, we just didn’t even see that coming. Our part of the world we’re sitting in a pretty good place (for fuel supplies),” he said.

Attendants were too busy that day to monitor customers who might have been stocking up on extra fuel, he said.

“It’s dangerous putting fuel cans in the back of an SUV like that, but you never know what anybody’s particular set of circumstances is,” he said.

Colonial Pipeline Company in Linden, N.J., a major pipeline that transports fuels along the East Coast, says it had to stop operations because it was the victim of a cyberattack. Colonial Pipeline said in a statement late Friday that it "took certain systems offline to contain the threat, which has temporarily halted all pipeline operations, and affected some of our IT systems." (Photo: Mark Lennihan, AP)

High demand fueled gas shortages throughout the Southeast U.S. the week of May 10 despite assurances from Colonial that it was trying to restore pipeline service by the end of the week.

Photos showing people filling gas cans, barrels and other containers with fuel spread across the internet amid the shortage. It even prompted a warning from the U.S. Consumer Product Safety Commission about safe storage and use of gasoline.

“Do not fill plastic bags with gasoline,” the agency Tweeted on May 12.

Alabama, where the photo was taken, was among the states least affected by shortages. GasBuddy.com reported about 6% of stations were without fuel at 12:37 p.m. on May 12.

Shortages in other states, though, were piling up by that point. Nearly two-thirds of North Carolina gas stations reported fuel outages at mid-day on May 12. About 42% of stations in Georgia, South Carolina and Virginia were short of fuel.

“After reloading current outages by state I just got the chills,” Gas Buddy’s head of petroleum analysis Patrick De Haan posted on Twitter on the afternoon of May 12.

Caution tape is wrapped around fuel pumps at an Exxon Gas Station on Boonsboro Road in Lynchburg, Va., May 11, 2021. More than 1,000 gas stations in the Southeast reported running out of fuel, primarily because of what analysts say is unwarranted panic-buying among drivers, as the shutdown of a major pipeline by hackers entered its fifth day. In response, Virginia Gov. Ralph Northam declared a state of emergency. (Photo: Kendall Warner, The News & Advance via AP)

The claim that a viral photo shows two people filling gas cans amid panic buying following the Colonial Pipeline shutdown is TRUE. The owner of the gas station confirmed its location in Andalusia, Alabama, and the person who shot the original image provided metadata proving its time and location.