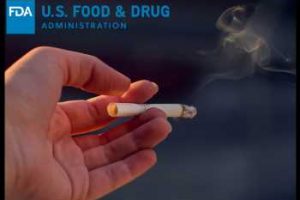 The U.S. Food and Drug Administration announced its plans for a potential rule aiming to reduce addictiveness of cigarettes and other combusted tobacco products, mainly in youth.

The proposed rule, part of the Biden-Harris Administration’s plans for future potential regulatory actions, would establish a maximum level of nicotine in cigarettes with the goal of reducing youth use, addiction, and death.

According to the agency, nicotine makes it very hard to quit smoking as addiction to nicotine in combusted products is the main driver of sustained use of these products.

The FDA noted that tobacco use is the major cause of preventable disease and death in the United States with 480,000 people die prematurely each year from a smoking-attributed disease. Also, tobacco use costs nearly $300 billion a year in direct health care and lost productivity.

As per an earlier FDA paper, by year 2100, a potential nicotine product standard could result in more than 33 million people not becoming regular smokers, a smoking rate of only 1.4%, compared to the current smoking rate of 12.5%. More than 8 million fewer people are also expected to die from tobacco-related illnesses.

So far, the FDA has taken action on around 99% of the nearly 6.7 million products for which applications were received by September 9, 2020. The agency issued marketing denial orders for more than 1 million ENDS products.

At present, the FDA restricts youth access to tobacco products by requiring retailers to check ID prior to sale and not sell to anyone under the age of 21.