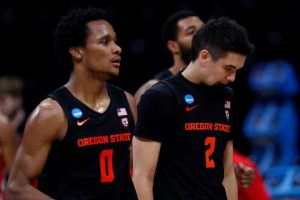 The stakes were high Monday night – with a trip to the Final Four on the line.

The men's NCAA Tournament has delivered some epic upsets in every round – Oral Roberts over Ohio State in the first round, Loyola Chicago over Illinois in the second and UCLA over Alabama in the Sweet 16.

What's in store for the Elite Eight?

So far, it's been all chalk. No. 2 seed Houston played dominant defensive basketball for the first 25 minutes against upstart No. 12 seed Oregon State. Then the Beavers made one last push by storming back from a 17-point deficit to knot the score with three minutes left. The Cougars had a counter punch, though, and pulled away to become the first Final Four squad of the 2021 Big Dance.

A look at winners and losers from Monday's Elite Eight games:

Houston. The Cougars (28-3) are back in the Final Four for the first time in 37 years following a 67-61 victory over Oregon State. It wasn't easy for Houston but offensive rebounding and clutch shot making down the stretch catapulted this team past the Beavers. The Cougars out-rebounded OSU 41-29 and got two clutch three-pointers from American Athletic Conference player of the year Quentin Grimes (18 points) in the closing minutes. The unsung hero for coach Kelvin Sampson's group was defensive stopper DeJon Jarreau, who smothered Oregon State star Ethan Thompson all night.