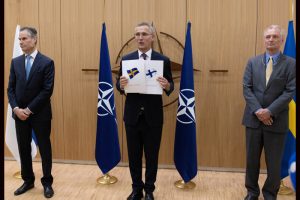 Finland and Sweden have simultaneously handed in their official letters of application to join the North Atlantic Treaty Organization.

Stoltenberg welcomed the requests, saying,”this is a good day, at a critical moment for our security.” “You are our closest partners. And your membership in NATO would increase our shared security,” he told the Ambassadors.

NATO Allies will now consider the next steps on the two Nordic nations’ path to the defense alliance.

“The security interests of all Allies have to be taken into account. And we are determined to work through all issues and reach rapid conclusions,’ said the NATO chief.

This move by Stockholm and Helsinki marks a major shift in the neighboring nations’ decades of military neutrality, evidently influenced by Russia’s invasion of Ukraine.

The process to accommodate the applicants could be fast-tracked and is expected to only take a few weeks, but application for NATO membership requires approval by all the countries of the 30-member bloc.

Both Sweden and Finland have rejected Ankara’s requests to extradite Kurdish militants who Turkey describes as terrorists.

“The leaders will discuss Finland’s and Sweden’s NATO applications and European security, as well as strengthening our close partnerships across a range of global issues and support for Ukraine,” the White House said.