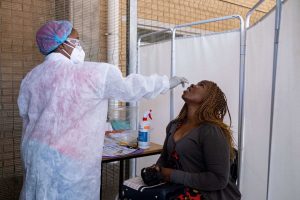 Preliminary data about the severity of the omicron Covid variant is "a bit encouraging," the White House's Chief Medical Advisor Dr. Anthony Fauci said on Sunday, following early figures from South Africa that suggest it may not be as bad as initially feared.

However, Fauci cautioned that more data was needed to draw a complete picture of omicron's risk profile. The World Health Organization said the variant was "of concern" on Nov.26, prompting a flurry of international travel bans and new Covid restrictions.

"Clearly, in South Africa, omicron has a transmission advantage," Fauci told CNN, adding that "although it's too early to make any definitive statements about it, thus far it does not look like there's a great degree of severity to it."

"But we've really got to be careful before we make any determinations that it is less severe, or really doesn't cause any severe illness comparable to delta, but thus far the signals are a bit encouraging regarding the severity," Fauci said.

At least 15 U.S. states have detected the omicron variant, as of Sunday, and that number is expected to rise, Centers for Disease Control and Prevention Director Dr. Rochelle Walensky told ABC News this weekend.

It comes as South Africa sees a rise in Covid cases attributed to the omicron variant, as well as an uptick in hospitalizations. Given the ongoing uncertainty surrounding the omicron Covid variant, experts are watching the real-world data coming out of South Africa closely.

A report from the South African Medical Research Council, released Saturday, suggests that the strain could cause a milder infection. It's too early to tell whether it poses a greater risk of death, however, given the relatively small amount of data and how recently the variant was detected.

The report also revealed that more younger people were being admitted to hospital with omicron Covid infections, but this could be related to lower rates of vaccination among such age groups in South Africa.

The document details the situation over the last two weeks at the Steve Biko/Tshwane District Hospital Complex in the Gauteng province where omicron was first detected, and which is now seeing a rampant rise in Covid cases.

The main observation in the report was that the majority of patients were not oxygen-dependent (as was common in previous waves, the report stated) and that most of the patients in the Covid wards were "incidental Covid admissions," having had another medical or surgical reason for admission to hospital.

These findings follow anecdotal reports from doctors in South Africa that the omicron variant could cause milder symptoms. The South African doctor who first spotted the virus said she had seen "extremely mild" symptoms among her own patients, but there has been no official data to back up those observations.

However, the report — which only looked at a small number of patients — noted that: "what is clear though is that the age profile is different from previous waves."

Analyzing 166 patients admitted to the hospital between Nov. 14-29, the report found that "the age profile differed markedly from the previous 18 months," with far more younger adults and children being admitted to hospital.

It stated that the increase in younger admissions to hospital could be a result of lower vaccination rates in younger people, stating "it may be that this is a vaccination effect as 57% of people over the age of 50 have been vaccinated in the province compared to 34% in the 18-to-49-year group."

There were no Covid-related deaths among 34 admissions in the pediatric Covid wards over the last two weeks, the report noted.

It is important to note that the patient information presented in the report only represents the first two weeks of the omicron wave in the Tshwane district; the report itself cautioned that "the clinical profile of admitted patients could change significantly over the next two weeks, by which time we can draw conclusions about the severity of disease with greater precision."

While this early data may be encouraging, it's important to keep it in perspective: they are based on preliminary findings from a small number of people.

When the omicron variant, or B.1.1.529 as it's formally known, was first reported to the WHO (by South Africa on Nov. 24, with the first known sample dating back to Nov. 9) the UN health agency warned that some of the mutations found in the variant are associated with higher transmission and the ability to escape immune protection.

"We do see an increasing growth rate, we see increasing numbers of omicron being detected," Maria Van Kerkhove, the WHO's Covid-19 technical lead, said during a press briefing Friday. "There is a suggestion that there is increased transmissibility, what we need to understand is if it's more or less transmissible compared to delta."

She added that there was an increasing number of hospitalizations being recorded in South Africa, but that public health officials hadn't seen an increased risk of death yet, although they were waiting on more data.

Experts and vaccine makers have noted it could take several weeks for the variant's true risk profile to emerge, as well as its potential response to current Covid vaccines.

South African President Cyril Ramaphosa said in a statement Monday that there was an urgent need for citizens to get vaccinated, saying "scientific evidence shows that vaccination is the most effective means of preventing the spread of new infections, and that vaccines reduce severe illness, hospitalisation and death."

"While we do not yet know what impact the omicron variant will have on hospital admissions, we have been preparing hospitals to admit more patients, and we are investigating how we can quickly secure medication for treating Covid-19," he added.