Home » Business » For years banks have asked for 20% down on a mortgage, but cash-strapped Americans are buying homes with less 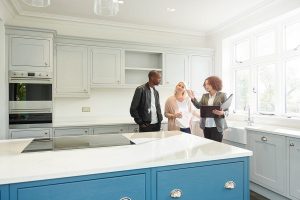 Personal Finance Insider writes about products, strategies, and tips to help you make smart decisions with your money. We may receive a small commission from our partners, like American Express, but our reporting and recommendations are always independent and objective.

Putting 20% down on a home purchase is daunting, and rightfully so.

For many young Americans struggling with student-loan payments, higher rent costs, and relatively stagnant salaries, saving a fifth of a home's value to get a mortgage simply isn't on the radar.

Would-be homebuyers are finding it can take years to save a full 20% down payment, especially for anyone living near a big city, where real-estate prices are soaring. According to Zillow, the typical home value in Los Angeles is $794,935. You'd have to save $158,987 to place 20% down.

These days, the practice of putting down less than 20% to secure a mortgage is becoming more common, and real-estate agents say it's a practical way to get into the market.

The 20% figure comes from the minimum payment most lenders require to avoid paying private mortgage insurance, an extra monthly payment that can cost 0.2% to 2% of the loan's principal balance. Banks charge PMI to borrowers who put down less than 20% to get some protection should the borrower stop making mortgage payments.

But Christian Morrison, a real-estate agent with Keller Williams in South Dakota, says that in areas where homes are increasing in value quickly, paying a small amount of PMI each month might be worth it while your home value climbs.

"I had a client that bought a house at the beginning of 2018 and they didn't put any money down," Morrison said, explaining that the client used a state program in South Dakota allowing people to buy a home without making a down payment. "They had to have PMI on it, which cost them an extra $86 a month."

"At the end of 2019, they went back to the bank to see what the equity stake was at the moment," Morrison continued. "And due to appreciation, their loan-to-value was 76%." Loan-to-value ratios compare the size of your loan to the total value of the home, and generally, loans with loan-to-value ratios below 80% don't require private mortgage insurance.

Once a mortgage's value reaches 78%, private mortgage insurance is automatically canceled. You can request for it to be canceled sooner, however, once your loan-to-value ratio reaches 80%.

In this buyer's scenario, the market helped the person reach 20% equity in just under two years. In a market that's growing, Morrison says, PMI can be gone rather quickly. When the home's value increases, the loan-to-value ratio decreases, making your loan eligible for PMI removal.

As for interest rates when you put down less than 20%, they may be slightly higher — Morrison says he typically sees interest rates for clients making low or no down payments increase by about 0.25%. That percentage can vary by state, however. It is also possible to refinance down the road to get a new interest rate on your mortgage, though you'll have to have an appraisal and pay closing costs to complete the process.

You can buy a house with less than 20% down, and it's not uncommon

Putting 5% allowed him to start building equity sooner rather than later. "Where I live in the Black Hills, our appreciation is starting to jump up," he said. "We're starting to speed up to the point where if you don't have a down payment, your interest rate may be a quarter percent higher, but you're going to gain so much equity in that time. It's either wait six months to a year and save up the money, or pay a little bit higher interest rate and gain a lot in equity."

In Morrison's professional experience, he estimates that 90% to 95% of his clients have paid down payments of less than 20%.

In other parts of the US, especially in more expensive areas, it's becoming common to make a smaller down payment. "I think 10% is, if not the new standard, it's acceptable," said Corrie Watterson, a realtor in Seattle. "Even if you're below that, if you have a conventional loan at 3% down, it's likely not going to impact the quality, price, or location of the home you can afford."

Focus on the monthly payment, not the down payment

For those wanting to get the lowest interest rate possible, and make their offer stand out as much as possible, 20% down is still something to aspire to.

"Everybody likes to put down 20% if they can," Watterson said. "It helps distinguish their offer from other offers in a multiple-offer situation. The smaller the loan, the less uncertainty, if you have a finance contingency, that the loan could potentially fall through somewhere between the offer being accepted and closing."

But to Watterson, the down payment isn't the main consideration when thinking about buying a home. "The most important thing is making sure that you feel confident that you can make your monthly mortgage payment, however much you put down," she says.

Note that PMI does increase your monthly payments — for someone with a typical good credit score between 720 and 759, ValuePenguin reports that your private mortgage insurance will cost 0.5% to 0.41% of your home's value each year. But PMI payments aren't forever. As you build equity, you will be able to stop making them.

In Watterson's experience, a lower down payment has become a way for many to get into homeownership and start building equity, despite the higher costs.

"Equity is still the major component of wealth for Americans who aren't already wealthy," Watterson said. "As long as you're sure you can pay that potentially higher monthly payment at 3% down, at 10% down — versus 20% down — I do encourage my clients to consider it."