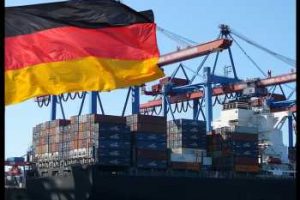 At the same time, imports growth eased sharply to 0.1 percent from 2.1 percent in the previous month. This was also weaker than the expected growth of 0.6 percent.

As a result, the trade surplus decreased to a seasonally adjusted EUR 13.2 billion from EUR 14 billion in the previous month and remained below economists’ forecast of EUR 13.6 billion.

Data showed that exports were 0.3 percent lower and imports 7.8 percent higher than in February 2020, the month before restrictions were imposed due to the coronavirus pandemic in Germany.

Year-on-year, exports growth halved to 7.1 percent from 14.5 percent in August and imports grew 12.9 percent, down from 17 percent in the prior month.

On an unadjusted basis, the trade surplus declined to EUR 16.2 billion from EUR 20 billion last year.

The current account of the balance of payments showed a surplus of EUR 19.6 billion versus EUR 25 billion in the same period of 2020.

The drop in German exports in September adds to the evidence that the economy‘s only growth drivers in the third quarter were private consumption and government expenditures, Carsten Brzeski, an ING economist.

“Looking ahead, we will first need to see industrial production picking up again before exports surge as well,” said Brzeski. “For a more fundamental rebound in industrial production and exports, supply chain frictions need to be left behind. This is something we will only see in the course of 2022.”