Home » ‘Get the word out’: New USPSTF guidelines lower age to begin colorectal cancer screening from 50 to 45

‘Get the word out’: New USPSTF guidelines lower age to begin colorectal cancer screening from 50 to 45 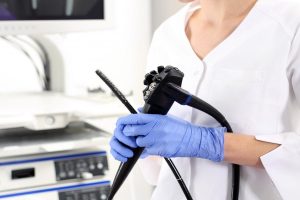 Vanassa Sebastian woke up one morning in July with excruciating pain in her stomach.

As a certified registered nurse anesthetist, she sent her husband to the pharmacy to get medication for what she thought was constipation or bad gas. But by the time breakfast rolled around, the Connecticut mom was curled up on the couch crying from the pain.

Her daughter convinced her to go to the emergency room, where after numerous tests, doctors found she was bleeding from a tumor inside her colon. At 49 years old, Sebastian was diagnosed with colon cancer.

“I’m healthy, I’m young, I’m in really great shape, I eat healthy, I don’t have any risk factors,” she said. “I never thought, ‘They’re going to diagnose me with Stage 3 colon cancer’… It was never on my radar.”

At the time she was diagnosed, the U.S. Preventive Services Task Force recommended people at average risk for colorectal cancer begin screening exams at 50 years old. On Tuesday, however, the agency officially lowered the age to 45, finalizing draft guidelines issued in October that will mandate insurance coverage.

The revised guidance follows 2016 recommendations from the American Cancer Society, lowering the screening age to 45. A concerning increase in colorectal cancer has been seen amongpeople under 50 years old since the mid-1990s, said Dr. Kimmie Ng, director of the Young-Onset Colorectal Cancer Center at Dana-Farber Cancer Institute, who treated Sebastian.

In the 45 to 49 age group, there are about 7,000 new colorectal cancer cases per year, and about 1,800 deaths, said Dr. Douglas Rex, president-elect of the American Society for Gastrointestinal Endoscopy and director of endoscopy at Indiana University. Additionally, this age group accounts for about 50% of colorectal cancer diagnosis occurring under the previous recommended age of 50.

Sebastian underwent emergency surgery to take out the tumor and a large portion of her intestines, followedby six months of chemotherapy. In February, she was officially declared cancer free.

But she can’t help thinking the ordeal could have been avoided if she was screened for colon cancer at an earlier age.

“Had I been screened at 45, I’m sure they would have picked up a polyp or the beginning stages of a tumor,” Sebastian said. “I wouldn’t have had to go through what I went through.”

Barry Kramer, an adviser to the National Institutes of Health on cancer screening, said he appreciated the way the task force divided up the evidence for each of its recommendations, and agrees that the strongest evidence suggests healthy people should be screened for colon cancer from ages 50-75.

For people age 45 to 50, the quality of the data is not as strong as for those over 50, but it is reasonable for someone to choose to get screened, said Kramer, the former director of the government’s Division of Cancer Prevention.

Ng says lowering the recommended age will make colorectal cancer screening accessible and affordable to millions of more people in the United States. American health insurance groups are required to cover, at no charge to the patient, any service the USPSTF recommends with sufficient evidence, regardless of the cost.

New mask guidelines: Great for some, confusing for others. What experts say this does to the CDC’s credibility.

Origins of COVID: Did the coronavirus come directly from animals or was it released from a lab? Top American scientists join call for answers.

This means insurers will be required to cover preventive procedures such as colonoscopies and stool tests designed to detect colon cancer in early stages.

Many gastroenterologists prefer to screen using colonoscopies, but studies find little difference in cancer outcomes among the different technologies.

“The best colorectal cancer screening test for you is the one you choose,” Kramer said.

Colonoscopies, considered the definitive test, are typically done once a decade and involve general anesthesia and a day’s worth of unpleasant preparation. Fecal tests are usually done annually, but require no preparation and might be better at catching faster-moving cancers. If blood is found in the stool with a fecal test, then the person needs a follow-up colonoscopy, Kramer said.

Colorectal cancer – which includes colon and rectal cancer – is expected to cause nearly 53,000 deaths during 2021, according to the American Cancer Society.

While deaths from colon and rectal cancers have been declining for several decades due to improved screening and treatment measures, deaths among young people have been increasing slightly in recent years, according to researchers.

More research is needed in people under 45 to pinpoint risk factors and tailor future guidelines for people that have them, she added.

In the meantime, Sebastian urges people to learn from her experience and get screened for colorectal cancer if they meet the USPSTF guidelines.

“Get the word out … if providers aren’t aware of this new change, then patients need to advocate for themselves,” she said. “Even if you don’t think it’s you, it can happen to you.”