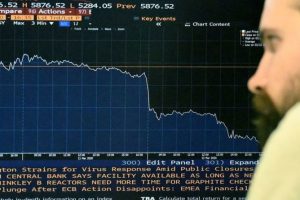 “It’s set off a fresh bout of extreme turbulence for the travel sector.”

Companies linked to the travel industry were also dragged lower with Rolls Royce who make and service engines for long-haul aircraft plunging 11 percent.

The hospitality industry is once again feared to be a likely victim to any new restrictions.

Ms Streeter added: “The immediate way the tough restrictions were imposed was a reminder of just how tied companies’ fortunes are to snap government decisions and the latest twists in the trajectory of the virus.

“This fresh fall in confidence is the last setback the industry needed given that it’s already faced with lockdowns in Europe.

“There had been high hopes of a bounce back in bookings, with Black Friday travel deals launched by airlines including British Airways and easyJet to lure people back into seats.

“But it’s going to take much more than a discounted ticket to calm nerves and restore optimism, particularly as many travellers have become weary of the rounds of cancellations they’ve experienced over the much of the last two years.’’

Oil stocks have also been hit by a fall in prices this morning with Shell and BP both seeing share prices fall over five percent.

Saxo Bank Chief Investment Officer, Steen Jakobsen explained: “The market got caught up in a wave of caution overnight with Brent falling three percent as the new and fast mutating virus variant drives worries about renewed restrictions on mobility at the time when the existing Delta variant is already triggering renewed lockdowns in Europe.”

He predicted a difficult decision for oil-exporting bloc OPEC+ next week when deciding production levels given weaker demand due to Covid and announcements this week of a release of millions of barrels of oil from reserves by countries including the US and UK.

European markets have suffered as well with the Euro Stoxx 50 index falling just over three percent.

Mr Jakobsen commented: “We observe the pandemic playbook in equities with technology and online companies falling less than physical companies such as miners, energy, and retailers.”

Asian markets have been following a similar downward trend today with Hong Kong’s Hang Seng index closing 2.67 percent down and the Nikkei 225 in Japan falling 2.53 percent.

In the US, futures for the Dow Jones have plunged over two percent suggesting American stocks will see similar losses when markets open.

US markets were closed yesterday for Thanksgiving and will see a shorter trading period today closing at 1pm Eastern Time.