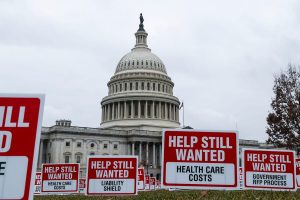 Goldman Sachs has called on thousands of small-business owners to virtually take to the US Capitol to demand more economic relief during the pandemic.

But the bank was forced to abandon the rallying cry it had chosen — "Storm the Hill" — after violent pro-Trump rioters literally stormed Capitol Hill in Washington, DC, on Wednesday to protest the presidential election results, The Wall Street Journal reported Thursday.

The virtual event is part of the Goldman-sponsored 10,000 Small Business Voices initiative, through which the bank is encouraging business owners to lobby Congress for a handful of COVID-19 relief programs aimed specifically at the business community.

Goldman had mailed out swag to participants, including t-shirts with the slogan "Storm the Hill," but the bank determined that the optics of that phrasing would in poor taste and told participants not to wear them during the January 13 event, the Journal reported.

"We chose the slogan to represent our enthusiasm to take part in a democratic process to advocate for small business," the bank wrote to participants, according to the Journal, adding: "If you have other 10,000 Small Businesses apparel, we would encourage you to wear it."

"For years, our democracy has built a reservoir of goodwill around the world that brings important benefits for our citizens," Solomon told CNBC in a statement, adding: "Recently, we have squandered that goodwill at a rapid pace, and today's attack on the U.S. Capitol does further damage. It's time for all Americans to come together and move forward with a peaceful transition of power."

Goldman, through the upcoming event — which it has since renamed "Virtual Capitol Hill Day" — and elsewhere, has lobbied for a variety of economic stimulus programs aimed at business owners, ranging from lower health care costs to tax breaks on loans to legal immunity if employees contract the virus after being asked to return to work.