Home » Business » Governments and Big Oil were first. The next wave of climate lawsuits will target banks and boards

Governments and Big Oil were first. The next wave of climate lawsuits will target banks and boards 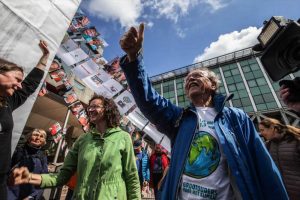 GLASGOW, Scotland — Financial institutions and individual board members could be the next targets of climate litigation cases, according to the campaigners who helped to secure a landmark courtroom victory against oil giant Royal Dutch Shell.

It comes at a time when countries are scrambling to reach consensus in the final days of the COP26 climate summit. Negotiators from 197 countries are taking part in discussions with the goal of keeping the all-important global target of 1.5 degrees Celsius alive.

There is not yet any clear indication of whether the talks will be able to meet the demands of the climate emergency.

"We have litigated against countries and been successful," said Roger Cox, lawyer for Milieudefensie, an environmental campaign group and the Dutch branch of Friends of the Earth. "Now we have shown that one can successfully litigate against fossil fuel corporations and I think that the next step is to start also litigating against financial institutions who make these emissions and fossil fuel projects possible."

"I even think after that … board members of these large private institutions who continue to willingly frustrate achieving the Paris Agreement might even become liable in years to come under direct liability regulations," Cox said on Tuesday.

His comments came as he spoke at The People's Summit for Climate Justice, an event hosted by the COP26 Coalition on the sidelines of the U.N.-brokered talks in Glasgow, Scotland.

The Hague District Court on May. 26 ordered the Anglo-Dutch oil giant to reduce its global carbon emissions by 45% by the end of 2030, compared with 2019 levels. It also said Shell is responsible for its own carbon emissions and those of its suppliers, known as Scope 3 emissions.

The ruling marked the first time in history that a company had been legally obliged to align its policies with the Paris Agreement and reflected a watershed moment in the climate battle.

A Shell spokesperson at the time described the decision as "disappointing." The company has since confirmed it will appeal the ruling.

'No-one wants to go to court'

"I think there is a lot of pressure that can be generated from a legal perspective against the major public and private systemic players in climate change and the energy transition," Cox said.

He cited young people rallying on the streets for climate action, activist shareholders trying to pressure board members to reduce emissions and a bombshell report from the International Energy Agency that said it sees "no need for investment in new fossil fuel supply" to achieve the Paris Agreement's goals.

"That taken together gives us the best chance at this very moment to actually try to create this radical transformation that needs to happen over the next decade," he added.

A report from a coalition of NGOs, published in March, found the world's largest 60 banks had provided $3.8 trillion of financing for fossil fuel companies since the Paris accord was signed in 2015. The authors of the report described the findings as "shocking" and warned runaway funding for the extraction of fossil fuels and infrastructure threatened the lives of millions worldwide.

To be sure, burning fossil fuels is the chief driver of the climate emergency. Climate scientists have repeatedly stressed that the best weapon to tackle rising global temperatures is to cut greenhouse gas emissions as quickly as possible.

Nine de Pater, researcher and campaigner at Milieudefensie, said Tuesday that the campaign group initially sought to persuade Shell to take meaningful climate action with protests and direct talks with both the company and politicians.

"All of that didn't make the difference that we needed," de Pater said. "So, in the end, the last resort was this court case. It is not what you want to do, right? No one wants to go to court. It is not the most fun thing to do but it was really necessary to force Shell to go in a different direction and to make Shell stop causing dangerous climate change."

"It is no longer possible for Shell to put profit over people — and that is historic. It is important because it is not just Shell, it is all companies now that really have to consider: 'Am I putting profit over people?'"

On confirming its decision to appeal the court ruling in July, Shell CEO Ben van Beurden said the company agreed urgent climate action is needed "and we will accelerate our transition to net zero."

"But we will appeal because a court judgment, against a single company, is not effective. What is needed is clear, ambitious policies that will drive fundamental change across the whole energy system. Climate change is a challenge that requires both urgent action and an approach that is global, collaborative and encourages coordination between all parties."

When asked what it would mean to see Shell successfully overturn the Dutch court ruling on appeal, Cox told CNBC: "That basically is the question that we had to ask ourselves before even starting climate litigation cases."

Cox said he first reflected on what courtroom defeats would mean in 2012 when preparing the Urgenda Climate Case against the Dutch government. This landmark case, upheld by the Dutch Supreme Court in Dec. 2019, found the government had an obligation to immediately and significantly reduce emissions in line with human rights obligations.

"We basically felt at that time already there is nothing to lose. Either we win or we don't, but we don't think there is anything to lose if we lose a case," Cox said. He added that there was a "moral obligation" to litigate and "to try to pierce through the status quo of short-term interest."

"Obviously when you start a case like that, you always know that you might lose but when you lose, there is always something to learn for ourselves or other climate litigators that they can build upon," Cox said. "So, you don't stop going to the streets as youngsters, and we as adults do the same in a way, if it doesn't immediately have an impact. You keep doing it until it has an impact."