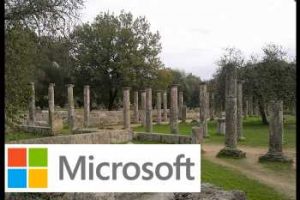 The Greek Government and Microsoft have set out to digitally preserve and restore ancient Olympia, the original home of the Olympic games, for future generations by harnessing technologies such as artificial intelligence (AI) and augmented reality.

The Hellenic Ministry of Culture and Sport and Microsoft are collaborating on this new digital revival project called “Ancient Olympia: Common Grounds.” Visitors around the world can virtually visit the ancient site of Olympia and experience history firsthand using the latest technology.

The project will enable viewers around the world to explore ancient Olympia as it stood more than 2,000 years ago through an immersive experience via an interactive mobile app, web-based desktop experience, or a Microsoft HoloLens 2 exhibition at the Athens Olympic Museum, which is now open to the public.

By digitally preserving ancient Olympia, people will be able to walk through the site that is brought to life in a realistic, engaging way that was never before possible. The digital archiving will also enable people of another generation or era to understand what humanity has achieved in the past and what is their capability today.

Microsoft noted that the project will bring together humanity and cutting-edge technology to benefit the world and empower coming generations with new ways to explore the past.

The use of state-of-the-art technology will not only provide the world access to digital representation of the Panhellenic sanctuary of Ancient Olympia and its cultural heritage, but also the values of Olympism, peace, harmony, excellence and noble rivalry.

The digital preservation project implemented through the cultural sponsorship of Microsoft promotes and highlights the unique and emblematic archaeological site of Ancient Olympia. The project digitally preserves a total of 27 monuments at the site, including the original Olympic Stadium, the temples of Zeus and Hera, as well as the workshop of the renowned sculptor Phidias.

These monuments survived thousands of years of weather, war, earthquakes, and modernization. They are meticulously conserved and restored by the Hellenic Ministry of Culture and Sports. But, now they are in need of digital preservation of the rich history to hand over to future generations.

In the 3D experience, these buildings are recreated in lifelike detail, painstakingly researched by the Hellenic Ministry’s expert archaeologists to be as true as possible to their original forms.

Through its AI for Cultural Heritage initiative, Microsoft partnered with technology company Iconem, which specializes in digitizing historic sites in 3D, to create the foundational model of ancient Olympia.

Microsoft AI processed hundreds of thousands of images of the site taken using both on-the-ground cameras and drones to create models so precise, they render as photorealistic.

The web experience may be viewed at olympiacommongrounds.gr, and the app may be downloaded on the iOS and Android app stores.