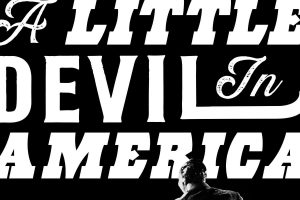 Performing and freedom is what stirs Hanif Abdurraqib’s latest offering, “A Little Devil in America: Notes in Praise of Black Performance” (Random House, 320 pp., ★★★ out of four). Examining performance isn’t new to Abdurraqib, either. In his previous work, “They Can’t Kill Us Until They Kill Us,” he writes: “Once you realize that it’s all performance the medicine goes down easier.”

In “A Little Devil in America,” Abdurraqib digs into historical, musical and personal vaults to unearth layered moments of performance, such as dancing in a basement on the east side of Columbus, Ohio, to the music and videos of Whitney Houston, conversations with elders at a local BBQ joint in Memphis and Josephine Baker working as a spy for France’s military. Abdurraqib details how these performances fit into the overall conversation centered on American culture.

The way in which Abdurraqib writes about performance in “A Little Devil in America” posits Black freedom. For instance, Abdurraqib tells the story of the late Don Cornelius, who began his career as a journalist reporting on the civil rights movement. Cornelius’ creation of “Soul Train,” an American music-dance television show, was his way of abating the stress of protestors and general laborers by giving them a daily break from fighting American racism. Where misogyny, racism and gender bias limited Black agency, “Soul Train” provided a space where Black people could move, twist and shout, smile and laugh freely.

Abdurraqib’s ideas about Cornelius’ dream of Black freedom of movement borrows a page from “They Can’t Kill Us Until They Kill Us,” where Abdurraqib writes: “The only way to build yourself into something unstoppable is to become intimate with all of that which would otherwise attempt to stop you.”

Abdurraqib also touches on the Black church. Church is where many Black people have two-stepped and held hands with the message of freedom found in Exodus. Combining popular culture and church music, Abdurraqib writes of the late Aretha Franklin, who was raised in Detroit’s New Bethel Baptist Church and brought her Christian faith to American culture.

Of Franklin’s Grammy-winning album “Amazing Grace,” Abdurraqib writes: “Aretha sings ‘What a Friend We Have in Jesus,’ ‘Mary Don’t You Weep,’ and ‘Amazing Grace’…This is Aretha, at the height of her game, coming back to see if she could match the swelling voices of a choir; to see if the words of hymn could still move her to tears midsong.”

Abdurraqib has also drawn parallels between Chance the Rapper’s music and the church. Chance’s “Coloring Book” project found the rapper waxing poetic about “Blessings,” “Angels” and God on the choir-backed record, “How Great.” According to Abdurraqib, Chance’s church-influenced album spread enough positive energy to usher people through the election of Donald Trump and the Pulse nightclub shooting.

For Chance, like Franklin, Cornelius, Houston, Baker and local business owners, joy has been made into a brand. As Abdurraqib writes in his previous work, joy is both “hollow and touchable, in part because it is something that can’t be explained as well as it can be visualized and experienced.”