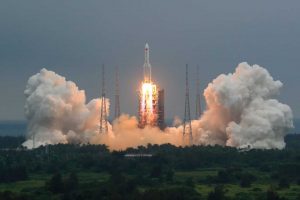 A section of a large rocket is hurtling back to Earth — but no one’s quite sure which part yet. And in Florida, Gov. Ron DeSantis signed a controversial election law impacting absentee ballot drop boxes.

It’s Julius with the news everyone is talking about.

But first, a gator wants a goal: Members of MLS team Toronto FC got more than they bargained for when a gator crashed their practice.

The Short List is a snappy USA TODAY news roundup. Subscribe to the newsletter here or text messages here.

DeSantis on Thursday signed into law numerous election rules changes that advocates say will make elections secure and critics charge will give Republicans an edge in next year’s midterm elections. The new rules will limit who can drop off a ballot on behalf of a voter. It will also enact new ID requirements and limit the number of absentee ballot drop boxes. The new law will force 2022 candidates to rethink their get-out-the-vote strategies. Florida is among 47 states that have debated at least 361 bills aimed at curbing voting rights, reported the Brennan Center for Justice on April 1. At least 55 of those bills are currently moving through state legislatures.

Florida Governor Ron DeSantis speaks during a press conference at the Okeechobee Steakhouse on December 15, 2020 in West Palm Beach, Florida. DeSantis talked about the importance of keeping restaurants open during the pandemic to help employees earn a living. (Photo: [GREG LOVETT/palmbeachpost.com])

States that lifted business restrictions early during the COVID-19 pandemic benefited from a boost in economic activity, but those gains were limited or short-lived as other states often caught up within a month, according to a study by Moody’s Analytics. Those states notched a longer-lasting advantage in employment but even in that critical category, the other states have narrowed the gap, the Moody’s analysis shows. “I don’t see the states, by reopening aggressively, bought themselves that much additional growth,” says Moody’s economist Adam Kamins. At the same time, the early reopening states didn’t pay a significant price by falling behind the rest of the country after having to reinstate restrictions because of COVID-19 surges.

What everyone’s talking about

A section of a large Chinese rocket is falling back to Earth and is expected to hit the surface sometime Saturday at an unknown location. Where it will hit “cannot be pinpointed until within hours of its reentry,” the Pentagon said in a statement released this week. Secretary of Defense Lloyd Austin is “aware and he knows the space command is tracking, literally tracking this rocket debris,” Pentagon spokesman John Kirby said. The rocket, the Long March 5B, carrying China’s Tianhe space station core module, lifted off in southern China on April 29. It’s roughly 100-feet-long and would be among the biggest pieces of space debris to fall to Earth.

In this April 29, 2021, file photo released by China's Xinhua News Agency, a Long March 5B rocket carrying a module for a Chinese space station lifts off from the Wenchang Spacecraft Launch Site in Wenchang in southern China's Hainan Province. The central rocket segment that launched the 22.5-ton core of China's newest space station into orbit is due to plunge back to Earth as early as Saturday in an unknown location. (Photo: Ju Zhenhua, AP)

Future Hall of Famer Albert Pujols will likely be released

The Los Angeles Angels designated first baseman Albert Pujols for assignment, signaling the future Hall of Famer’s likely release. A person familiar with the situation told USA TODAY Sports’ Bob Nightengale that Pujols had been unhappy with his playing time. The person requested anonymity because of the sensitivity of the situation. Pujols currently sits at 667 home runs, having recently passed Willie Mays for fifth on MLB’s all-time list. The future first-ballot Hall of Famer has 3,253 hits to his name and 2,112 RBI over a career that has seen him win three MVPs (2005, 2008, 2009), and earn 10 All-Star selections. Pujols was batting .198 with five home runs in 86 at-bats this year.

Albert Pujols, front, is in the final year of his 10-year deal with the Los Angeles Angels. (Photo: David Zalubowski, AP)

A break from the news

This is a compilation of stories from across the USA TODAY Network. Want this news roundup in your inbox every night? Sign up for The Short List newsletter here.