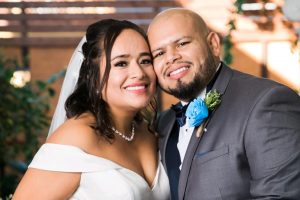 It's been almost a year now since the U.S. Department of Education allowed tens of millions of federal student loan borrowers to press the pause button on their bills because of the financial damage wrought by the coronavirus pandemic.

Around 90% of eligible borrowers accepted that offer, according to data analyzed by higher education expert Mark Kantrowitz.

As a result, life without the monthly bills has become the new normal.

Anna Flores, a counselor at a charter elementary school in Lakeview Terrace, California, hasn't even signed into her lender's account since March 2020. That's left her with an extra $350 a month. She owes almost $100,000.

Between going out less and not having to pay her student loans, she was able to save more than $12,000. Before the pandemic, she had nothing in the bank. "Not a single dollar," said Flores, 34.

She'd been engaged since December 2019 but, with no money saved, the cost of a wedding felt daunting.

After she and her fiancé had built up their savings, they began planning a ceremony.

Finally, in November, she married her husband, Higinio Jr., in a small chapel with a garden. Around 20 people attended. They had more than enough to cover the $8,000 cost of the wedding.

"The pause has worked so much in our favor," Flores said. "It's allowed us to really dream."

The couple has continued to aggressively save, and they still have more than $4,000 in the bank. They've also started investing and paid off much of their credit card debt.

Feeling more financially secure also led them to take a risk and start a baking business together. They've since become known in their San Fernando Valley community for their "chocoflan," a fusion of chocolate cake and flan.

There are more than 44 million student loan borrowers in the U.S., and the country's outstanding balance is expected to exceed $2 trillion by 2022. The average student loan balance is around $30,000, up from $10,000 in the early 1990s, with many borrowers owing $100,000 or more. The average bill is $400 a month, according to Kantrowitz, and research has found those payments make it harder for people to save for their futures, open businesses and start families.

The last 12 months have given borrowers a taste of a different life.

Ethan Barnhardt, a local government administrator in Columbus, Ohio, has around $60,000 in student loans. His wife, Elizabeth, who's on her way to becoming a doctor, owes more than $400,000. Their combined monthly payments were over $700.

A year off from those payments has left them on much stronger financial footing, Barnhardt said.

The couple has been able to save for their retirement more than ever before; their emergency savings, meanwhile, is the largest it's ever been.

"It gives you a good feeling of stability," Barnhardt, 33, said.

When unexpected expenses used to come up, they'd pull out their credit cards. Not anymore. When Elizabeth's car recently needed new break pads and tires, they paid for the bill in cash.

And for the first time, he and his wife are seriously thinking about starting a family.

"We both want to be able to have that experience of raising kids," Barnhardt said.

More from Personal Finance:
$45 billion-plus in rental aid may be available. How to apply
Timing your tax return right could mean a bigger stimulus check
New relief bill could help keep seniors out of nursing homes

On his first day in office, President Joe Biden extended the payment pause and interest waiver for federal student loan borrowers through Sept. 30, meaning many borrowers may go as long 18 months without making a payment on their debt.

For Leticia Ortiz, who owes around $8,000 in student loans, that break has been necessary. Before the pandemic, Ortiz, 60, lost her job as an executive assistant.

Finding new work has only became harder during the public health crisis. She was scared that she'd fall behind on her bills, including her mortgage. She owns a one-bedroom condominium in Colton, California.

But not having to pay $160 a month toward her student loans gave her more breathing room. She was able to send some of the extra money to her mortgage lender. She was also able to avoid dipping into her small retirement savings.

To stay positive during these trying times, she focuses on the months she has left without student loan payments rather than worrying about what will happen when the bills resume again in the fall.

"Right now it's just hopeful," Ortiz said. "It gives me the better part of this year to lock down a job."