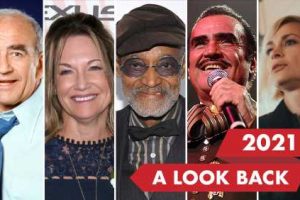 It was another Year of Covid in 2021, and the sadness extended to many beloved and groundbreaking people in the show business and media worlds who died during the past 12 months.

Scroll through a photo gallery above.

And everyone in the show business community bows their head to the memory of Halyna Hutchins, the cinematographer who was killed on the set of Rust in October.

A toast to all of the legends and behind-the-scenes people who passed in 2021.