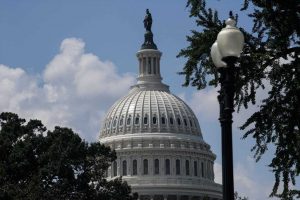 The White House called for a 39.6% top federal tax rate on long-term capital gains and dividends — nearly double the current 20%.

Long-term capital gains tax applies to assets like stocks and homes that have grown in value and owned for at least one year; taxpayers owe money on the appreciation when they sell an asset. A dividend tax applies to distributions of profits that companies make to their stockholders.

Biden's policy would only apply to the richest Americans — the top 0.3%, or those with $1 million or more of income. It'd be among the highest rates on capital gains and dividends in the developed world.

But House Ways and Means Committee legislation unveiled Monday would tax capital gains and dividends at a much lower top rate, of 25%. The House proposal would apply to single filers with at least $400,000 of income and married couples with $450,000.

Put another way: Biden's plan would have raised the top federal tax rate by 98% (relative to current law) for the richest Americans, while the House proposal increases it by 25%. The House plan would also raise taxes for a broader swath of people.

"This change is FANTASTIC for the uber-wealthy," Jeffrey Levine, an accountant and certified financial planner, who serves as chief planning officer at Buckingham Wealth Partners, wrote in a tweet.

"For the 'merely' affluent taxpayer though? Not so much," he added.

An existing 3.8% Medicare surtax and state levies would come on top of any change to the federal rate.

The wealthy get more of their income from investments versus wages relative to low- and middle-earners.

For example, the top 0.1%, who earn $3.4 million or more, get more than half their annual income from capital gains, dividends and interest; a quarter is from wages and benefits, according to a Tax Policy Center analysis from 2019.

More from Personal Finance:
Mega Millions and Powerball jackpots are now above $400 million
House Democrats promise 'meaningful' relief for SALT deduction cap
You don't have to be Britney Spears to get a prenup

By comparison, wages and benefits account for about 60% to 70% of annual income for taxpayers outside the richest 1%, according to the analysis.

"[The House proposal] is obviously not as punitive from their standpoint as the original proposals were," James Hines Jr., an economics professor and research director of the Office of Tax Policy Research at the University of Michigan, said of the wealthy.

Of course, wealthy Americans may not be cheering either proposal; they'd likely prefer their tax rate not increase at all, Hines said.

The plans also differ in how they'd tax inheritances that have appreciated significantly in value.

Biden's plan would tax an asset's appreciation upon its owner's death. This would aim to prevent the super wealthy from continually passing stock and other financial assets to the next generation for little or no tax.

(Capital gains less than $1 million for single filers and $2.5 million for married couples would be exempt.)

The House plan preserves the status quo, which doesn't impose this tax at death. Existing law also lets heirs receive an asset at its current value, erasing the paper gain and thereby diluting their future tax bill if they sell.

The wealthiest families receive the largest inheritances — $719,000, on average, at the time of inheritance, according to the Federal Reserve's Survey of Consumer Finances. (The average for all Americans is $46,000.)

Of course, final legislation could ultimately change from both the House and Biden proposals as Democrats try to raise money for up to $3.5 trillion of education, healthcare, childcare, climate, paid leave and other measures.