How Covid science, the Fed and bull market help to understand the omicron stock outlook 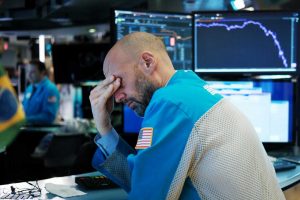 Markets don't know much about the new Covid virus variant omicron, and markets don't like uncertainty. This helps explain why the Dow Jones Industrial Average fell over 900 points on Friday, and the uncertainty will linger even as stocks and commodities turned back into the green on Monday morning.

It will take days if not weeks for scientists to answer questions about omicron, including how transmissible it is, and how good the high number of mutations in the new variant have made it at evading immune protection, including vaccines. Vaccine makers including Moderna are already at work on omicron and saying a shot for the variant could be ready early next year, and other major drug makers are studying omicron too, such as Pfizer, Johnson & Johnson and Astra Zeneca.

While the markets and investors are viewing the Dow dip as a buy opportunity on Monday morning, in this case, there is still a lot that hinges on the science.

"Most new variants can be ignored. This one can't be," said Ashish Jha, Dean of the Brown University School of Public Health on CNBC on Friday.

The way omicron has taken off suggests it could be more contagious, Jha said, but scientists don't yet have the data they need to know how effective vaccines will be against it. The lab data and clinical data needed to answer these questions will take a "few days to the next few weeks," he said.

Jha said the focus should not be on the high number of mutations relative to other variants. "That doesn't bother me," he said.

In fact, Dr. Scott Gottlieb, former FDA Commissioner and a CNBC Contributor who is on the Pfizer board, said on CNBC on Friday that there is research showing that the more mutations a variant has, the less contagious it becomes. But both Gottlieb and Jha stressed that it is where certain mutations are located within omicron that is troubling.

The World Health Organization said omicron has more than 30 mutations on the spike protein that binds to human cells, and it features mutations associated with higher transmission and potentially reduced antibody protection.

"Where the mutations are located is concerning," Jha said, as that could lead to more immune evasion. "The other thing is how quickly it has taken off in South Africa and elsewhere. We haven't seen another variant outcompete Delta this effectively."

"It has mutations associated with immune escape," Gottlieb said, but he added there isn't scientific data yet that proves omicron will "fully or even meaningfully escape vaccines."

On Monday, Gottlieb said that omicron may have been circulating from "quite some time" already.

Gottlieb would expect to see some decline in the neutralization of the virus, but told CNBC on Friday, "I wouldn't expect to see something that falls off a cliff" in terms of vaccine effectiveness against omicron. "We can reengineer vaccines very quickly," he added.

On Monday morning, Moderna CEO Stephane Bancel said the mutation on the omicron variant seemed likely to make it highly infectious and a more concentrated booster shot could be prepared soon but it would take months to ship a new vaccine.

Pfizer CEO Albert Bourla said on CNBC on Monday morning that Omicron is of concern for several reasons, but the company has been preparing for something like it for months.

"The playbook is to understand a little bit better and then within weeks, I think we will know most of the information that needs to be known, but every day we learn more," he said.

Vaccine effectiveness remains to be seen, but he does not think the result will be vaccines that "don't protect," but could protect less.

Pfizer made its first DNA template on Friday for a potential new vaccine, which is the first part of the development process of a new vaccine, and he said that the company is confident, as it has said in the past, that it can make a new vaccine in less than 100 days. Bourla noted that Pfizer build a vaccine for the delta variant and beta variant which did not end up being used.

The current vaccine regimen of two shots and a booster shot may not be "equally effective" at 95 percent-plus against the omicron, he said, but he added, "I will be very surprised if we are very, very, very low. And as I said if it is low enough, within 95 days basically, we will have a new vaccine."

"It's early days to call this, to say it will really change the nature of the game where we have a lot of immunity in the U.S.," Gottlieb said. "The risk is we get through Delta and this new variant starts to get a foothold and changes the equation for spring and summer. I think it's way too early to draw that conclusion, but it is the risk," he said.

With major scientific issues still to be resolved, there are some views from the market that are worth taking into account after Friday's stock selloff, the largest of the year and its worst day since October 2020, and why stocks didn't continue down on Monday morning. And there is a key view of the Covid economy that was expressed by Federal Reserve Chair Jerome Powell last summer.

The Fed on an economy learning to live with Covid

Last July, as the delta variant was a major focus, Powell made the case that the threat to the economy was not as great as might be assumed.

"What we've seen is with successive waves of Covid over the past year and some months now, there has tended to be less in the way of economic implications from each wave," Powell said at a press conference that came after a summer two-day meeting of the Federal Open Market Committee. "We've kind of learned to live with it, a lot of industries have kind of improvised their way around it," Powell said. "It seems like we've learned to handle this."

The Fed may not move as fast as some of its more hawkish members would like to move, but isn't likely to change course to be much slower either with the threat of inflation remaining high. A generally accommodative stance from the Fed even as it pulls back from its highest level of crisis support is good for stocks.

The Fed futures market is now penciling in a 41% probability of a May rate hike, which is dialed back a little bit, but means the market isn't ready to call that scenario as being entirely out either. The base case remains the Fed outlook for now: the central bank keeps its current taper in place while it awaits more information on omicron and less uncertainty ahead of its mid-December FOMC meeting.

"I think this will be a reminder that the Fed is very quick to ease and very much take its time when it comes to tightening and the overhang of Covid will just reinforce that," said Peter Boockvar, chief investment officer of Bleakley Advisory Group, speaking on CNBC Friday. "While they still need to tighten, they aren't going to speed it up and have to take one step at a time to see if can ever get through the taper without having to halt due to Covid."

A big risk remains how any shift in central bank policy and a Covid outbreak course across the globe contributes to more inflation.

"Anything that inhibits the supply side from here will just continue the inflationary trend," Boockvar said. "And that will continue to weigh on the Fed. "Inflation will get extended," he said.

The stock market was poised for a pullback

An S&P 500 Index that was up 25% for the year into Friday did not provide investors with much of a cushion when something unexpected occurs.

The S&P 500 experienced its worst opening gap in over a year on Friday, but according to Bespoke Investment Group, since the low on March 23, 2020, big gaps down for the market (on both Covid news and non-Covid news) have not resulted in longer-term downtrends.

Since March 2009, the beginning of the bull market after the financial crisis, there have been 71 "garden-variety profit-taking corrections," according to Yardeni Research, and this may be another one on renewed fears of a global public health crisis.

Tom Lee, managing partner and head of research at Fundstrat Global Advisors, described the Friday selling as a "fierce reaction" that makes sense when you consider the market will always be worried about a change in visibility and potential cause of panic among policymakers and consumers.

Fundstrat has been bullish on stocks this year, but also had expected short-term pressures before the end of the year, and in describing the Friday close, Lee said it "might be close to a tradable low."

In a comment that echoed Powell, he added, "I am not a scientist but there has not been a variant of Covid that has truly changed the direction of the economy, so I know this is alarming but investors need to take it in stride too."

The depth of any selloff is impossible to determine, but he said the speed and timing of Friday's selloff — the short trading day with few people at their desks — made him less inclined to expect the selling to deepen.

"I still think we're on track for a fierce December rally … led by whatever is getting hit. The cyclicals, casinos, and hotels and retailers, these are companies that dramatically cut costs and have huge demand," Lee said.

Even after the VIX spike on Friday, historical cycles should lead investors to look for when the VIX futures invert and the pricing implies more near-term risk, but in this case, the VIX is still positively sloped and that means investors are not yet seeing an imminent calamity for the market.

Since World War II, the market has risen roughly 7% from the October low through the end of the year across 90% of these seasonal time periods. With a 9% gain since October, "We are ahead of the game," noted Sam Stovall, chief investment officer at CFRA Research, speaking on CNBC on Friday afternoon.

The 9% gain meant the market was due for "consolidation," said Keith Lerner, co-chief investment officer and chief market strategist at Truist, speaking on CNBC on Friday afternoon. "It's a gut check here and it's too early to know but people should have some optimism," he said. "We have gone through two years of this pandemic and the market adjusts and profits are at a record high."