How did Pandemic Affect Bank Deposits? 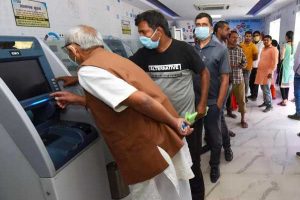 The correlation between withdrawal of deposits and the Covid death rate is stark, reveals Tamal Bandyopadhyay. Different banks are dealing with the pandemic differently.

A few have stopped growing, while others are growing with caution.

Also, after giving a cold shoulder to the corporate sector for the past few years, a few banks have started growing their corporate loan books for de-risking the balance sheets as more retail loans are turning bad.

These are the business trends. How has the pandemic affected the customers?

An internal study, jointly conducted by the credit risk management department and the economic research department of the State Bank of India, tells that story.

The only Indian bank in the list of the world’s 50 largest banks by assets, the State Bank of India is a proxy for the Indian economy.

It represents little less than one-fourth of India’s GDP. Roughly one out of every three Indians banks with the State Bank.

During the first wave of pandemic, when there was a nationwide lockdown, the banking sector’s deposit portfolio rose as people stopped spending.

But the most affected districts saw an outflow of deposits as the customers took out money from banks to meet medical emergencies.

Nine districts in Maharashtra accounted for more than 50 per cent of the outflow — Rs 55,761 crore.

More interesting facts have come out from an analysis of customer behaviour of the State Bank during the second wave of the pandemic, particularly in rural India which had 16.7 per cent share of GDP in the financial year 2021.

The State Bank data from this phase establishes the links among outflow of bank deposits, Covid death, deterioration in the quality of loan assets and emergence of a new loan product. Between April and May 2021, when the second wave hit India, the number of districts that saw outflow of bank deposits almost doubled as compared to the first wave.

Maharashtra, Uttar Pradesh and Rajasthan have seen at least 60 per cent of the pandemic cases in rural pockets.

Similarly, in August-September 2020, little over 28,000 Covid deaths were reported in rural India.

The comparable figure for April-May 2021 is 83,683 (these are being continuously revised).

Analysis of the State Bank’s business data for 735 districts across the country shows that the bank recorded deposit outflow in 213 districts in April-May 2021.

These are East Delhi, Mumbai, Sambalpur, Thiruvananthapuram and Bengaluru.

A year ago, in April-May 2020, barring East Delhi, other districts had witnessed deposit accretion, led by Mumbai.

The top 20 districts that had seen deposit outflow include Gandhinagar, Raipur, Jaipur, Sagar, Akola and a few others, along with the big metros.

In all these places, the death rate was higher than the national average.

In two months between April and May 2021, the State Bank’s term deposit portfolio, in line with the industry trend, witnessed premature withdrawal.

The entire banking system might have seen premature withdrawal of close to Rs 1.4 trillion term deposits.

The correlation between withdrawal of deposits and the Covid death rate is stark.

In 189 of the 735 districts where the State Bank is present, the death rate was higher than the national average during the second wave.

At least 27 districts in 13 states witnessed up to 2 per cent premature withdrawal of term deposits.

Along with the outflow of deposits, the most Covid-affected districts have shown a spike in non-performing assets in the bank’s mortgage portfolio.

For the purpose of analysis, the bank has focused on 84 districts that have at least Rs 100 crore (Rs 1 billion) mortgage portfolio.

In this group, 27 districts with much higher death rates have shown more than 3 per cent bad loans.

Thirty districts that have shown between 1.5 per cent and 3 per cent home loan NPAs also have death rates higher than the national average; many of them have also seen outflow of deposits. Maharashtra and Karnataka dominate this list.

Another 27 districts, which are at the bottom of this list with home loan NPAs between 1 per cent and 1.5 per cent and higher than national average death rate (in some cases beyond 2 per cent), are fairly well spread out across geographies, although Gujarat’s contribution is more than other states.

Finally, in all high-mortality rate districts, loan against gold jewellery emerged as a popular loan product, the currency of last resort.

Historically, raising money by pledging family gold has been a southern India phenomenon but during the pandemic the trend spread across geographies.

People raised gold loans to meet emergency medical needs and even to arrange for funerals.

Going by data from the ministry of labour and employment, the Employees Provident Fund Organisation has settled 7.244 million claims, disbursing Rs 24,897 crore (Rs 248.97 billion) in three months between April and June 2021.

Among all places, the most varied trends are seen in Delhi, mirroring the national scene.

While East Delhi has shown a rise in bad loans and deposit outflow, the highest in any single district, the affluent South, South East and South West Delhi have shown no major deterioration in asset quality.

They also saw new deposit accretion. The death rate in East Delhi was far higher than in the other three parts.

Clearly, the pandemic has affected the affluent class less than others. This is also the story of India.

The gap between the haves and have-nots has widened. Addressing this will be the biggest challenge in the post-Covid world.

Tamal Bandyopadhyay is a consulting editor with Business Standard, is an author and senior adviser to the Jana Small Finance Bank Ltd.