Home » Business » I was in DC for the inauguration. The overwhelming security state felt disturbingly similar to the worst parts of the post-9/11 response. 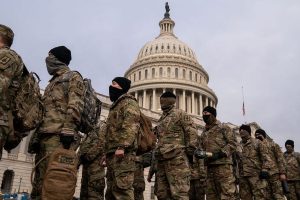 In the immediate aftermath of September 11, 2001, a number of surreal sights and sounds became permanently burned into my brain.

The cloud of smoke and dust that enveloped Lower Manhattan, which took days to dissipate. The regular hum of low-flying helicopters and military jets. And the sign on the New Jersey Turnpike that read: "New York City Closed to All Traffic."

This week I attended Joe Biden's inauguration in Washington, DC, and I felt echoes of those same eerie post-9/11 emotions, especially when I saw highway signs that read: "Avoid Travel to DC."

When I arrived in the capital I saw armored vehicles, National Guard troops manning scores of checkpoints, and ten-foot-high fences stretching for miles. The DC Metro police, Capitol police, and Secret Service officers on the streets vastly outnumbered the handful of non-security pedestrians.

While the death tolls were dramatically different, the Capitol attack and the 9/11 attacks were both such previously-unthinkable events that they caused the conventional wisdom to rush towards a massive government reaction, any reaction.

But with almost 20 years of hindsight on 9/11, the conventional wisdom now holds that many parts of the overwhelming government reaction to that tragedy — whether it was starting two "forever wars" or creating the bureaucratic behemoth of the Department of Homeland Security — were overreactions.

In the face of our collective outrage at this latest tragedy, we ought to remember the mistakes of the past and maintain some sober humility in the early days of the Biden administration.

But walking through Washington, DC, during inauguration week gave me the sinking feeling that we're about to make many of the same mistakes we made in the shell-shocked days after 9/11.

Be vigilant against "security" mission creep

The Trump-incited attack on the Capitol, like the 9/11 attacks, was both a deadly criminal conspiracy and a full-frontal assault on the American psyche. Indeed, it's believed that the United 93 hijackers had intended to crash into the Capitol dome, until passengers rebelled and the jet crashed in a Pennsylvania field.

Americans were traumatized by both attacks, even if they had no personal connection to the victims. And when Americans are traumatized, they demand swift and severe action, often by surrendering civil liberties and granting the government new emergency powers.

For its part, the government is all too happy to accept that deal.

I'm not saying that immediate and overwhelming responses to seismic events like these don't make a certain amount of sense. Grounding all air travel for just a few days after 9/11, for example, seemed prudent in the wake of chaos and mass grieving. The same goes for international travel restrictions at the onset of the COVID pandemic.

But in most cases the "emergency response policies" that required such new sweeping surveillance powers, like the PATRIOT Act, have a strange way of never officially ending.

Panic-driven policies after 9/11 created the security theatre troupe that is the Transportation Security Administration. Meanwhile, we're still taking our shoes off almost two decades after a single failed shoe bombing, and TSA screeners have been found to have as high as a 96% failure rate at detecting smuggled weapons.

Now in the wake of the Capitol attack, there are legislative calls to massively expand law enforcement's surveillance powers and to widely broaden the definition of "domestic terrorism."

While I've got little sympathy for the far-right extremists who livestreamed their attack on the Capitol, history has shown that huge dragnets have a way of roping in the innocent along with the guilty — like when thousands of Muslim and Arab-Americans were placed under suspicion for no legal reason at all.

The Biden administration and its allies in the media are wasting no time in pushing the narrative that new security laws and powers are necessary to defend the Republic.

Thankfully, some people remember seeing this movie before.

I spoke with Democratic Rep. Rashida Tlaib of Michigan this week about a letter she and nine other progressive House members sent to congressional leadership opposing such drastic measures. In the letter, Tlaib correctly pointed out how often these novel powers are directed at marginalized communities, and how they can be misconstrued, as when the FBI designated Black Lives Matter as an "extremist group."

"You are further undermining our democracy, not protecting it, by putting our human and civil rights at jeopardy," Tlaib said.

The overwhelming military and police presence in DC for the inauguration was chilling, but I'm willing to concede it may have been worthwhile for a very specific and limited amount of time. After the shocking ineptness of leadership in failing to protect the Capitol, no one wanted to take any chances for the inauguration.

But I don't understand the need to keep 7,000 troops in the capital until mid-March. So far, no explanation has been given as to why they're being kept around. They just are.

This is "security" mission creep.

And without a vigilant citizenry demanding "emergency powers" be sunsetted after a period of time, we will have irrevocably surrendered rights that those in power will never be inclined to voluntarily give back.

Walking around occupied DC — empty, desolate, at times utterly silent — was itself somewhat traumatic. I couldn't believe that this was the capital of my country as a new president took office.

But whether or not the abundance of caution was the right thing to do, it sure feels like we're in the early stages of a drastic and soon-to-be-regrettable overreaction.