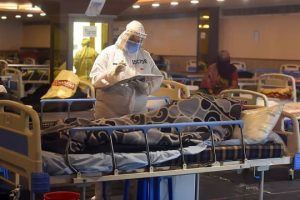 As India grapples with a deadly second wave of coronavirus, authorities have warned of a rare fungal infection that can maim or even turn fatal if left uncared for.

Several media reports have said that doctors in the country are reporting cases of mucormycosis, informally known as "black fungus," among recovering or recovered Covid-19 patients in states like Maharashtra and Gujarat as well as in Delhi.

Mucormycosis is a "serious but rare fungal infection caused by a group of molds called mucormycetes," according to the U.S. Centers for Disease Control and Prevention. It most commonly affects the sinuses or the lungs after inhaling fungal spores from the air, but can also occur on the skin following an injury or in some instances affect the brain, the CDC said.

The infection is more common among people who have underlying health problems or are on medication that lowers their body's ability to fight germs. Researchers examining past murcormyscosis infections in India found that diabetes was the most common underlying disease, occurring in 54% to 76% of cases.

While the infection is treatable, the CDC estimates a mortality rate of around 50%, though it said that varies depending on underlying conditions, type of fungus and body site affected.

But the state-run Indian Council of Medical Research (ICMR) said patients who have had prolonged stays in intensive care units or are immunosuppressed due to steroids can also be at risk.

Many severe Covid-19 patients in India are being treated with corticosteroids like dexamethasone, an anti-inflammatory drug that also reduces the immune system's ability to fight infections and other disease to alleviate symptoms, making them more susceptible.

But a government official reportedly said last week that there is "no big outbreak" of the fungal infection in India.

What are the symptoms?

ICMR issued an advisory over the weekend urging doctors and patients to look out for early symptoms.

Those include nasal congestion and discharge, one-sided facial pain, numbness or swelling, toothache and loosening of teeth, blurred or double vision, redness around eyes, fever, breathing difficulties as well as chest pains.

Treatment options include antifungal therapy, reducing or discontinuing steroids and other drugs that suppress the immune system while in more severe cases, surgery may be required to remove all necrotic tissues from the body, according to ICMR.

If left untreated for too long, it can lead to permanent damage, such as loss of eyesight, as well as death.

Mucormycosis was present in India even before the Covid-19 pandemic began last year. Official data is scarce due to the lack of population-based studies, but some researchers estimate the prevalence of mucormycosis is around 70 times higher in the country than the rest of the world.