India's Covid-19 cases are rising again. One state is getting hit especially hard 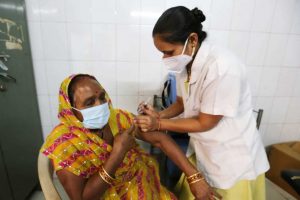 India's Covid-19 cases are rising again and the country's richest state is getting hit hard.

The country's second most populous state accounted for 57% of all cases reported in India over the same period. Infection cases have been rising since mid-February, but fatality rate remains relatively low.

Maharashtra's state government imposed night curfew last Sunday and banned all gatherings, including political and religious ones. It also enforced a mask mandate.

While authorities are debating on further restrictions to curb the spread of the virus, local media reports said that a total lockdown of the state — similar to last year's nationwide lockdown — may not be in the cards.

Billionaire businessman Anand Mahindra, chairman of Mumbai-based conglomerate Mahindra Group, said on Twitter this week that a lockdown would hurt "the poor, migrant workers & small businesses." Instead, he urged Maharashtra's chief minister to focus on building up hospitals and health-care infrastructure and to avoid Covid-related deaths.

The economic impact from India's second wave of coronavirus infection appears to be localized for now, Citi economists said in a report this week.

"Both the geographic nature of Covid spread and lower appetite among policy makers would keep lockdowns in 2021 more localized and less stringent," said economists Samiran Chakraborty and Baqar M Zaidi. They pointed out that more than half of the active Covid cases are concentrated in 10 cities, with eight of them in Maharashtra.

Those 10 cities account for just around 10% to 12% of India's GDP, according to Chakraborty and Zaidi.

"So localized lockdowns in these cities is unlikely to lead to large-scale disruption of economic activity in the country," they said, adding that they still remain concerned about contact-based service industries that are likely to suffer more due to the second Covid wave.

Last year's nationwide lockdown sent India into a technical recession, and disproportionately impacted small business owners and workers in the informal sector. In the first wave, the infection rate peaked around September.

India is also preparing for upcoming state elections and regional festivities, which tend to draw large crowds gathering in places, pointed out Radhika Rao, India economist at Singapore's DBS Group. She said heightened preventive measures are needed to slow the spread of the virus.

In a recent note, she said the ongoing vaccination campaign can act as a speed breaker to slow the outbreak.

India launched one of the world's largest mass inoculation campaigns in January, with an initial aim of vaccinating some 300 million people including frontline workers, older residents and those with underlying health conditions.

Starting Thursday, India will allow people who are 45 years and older to get Covid shots regardless of their health conditions. Last week, Health Minister Harsh Vardhan said there are plans to widen that age bracket to include more people.

At the current rate, it could take the South Asian nation 2.4 years to vaccinate 75% of its population, according to a recent report from New Delhi-based think tank Observer Research Foundation. That is typically the minimum percentage of the population that needs to be inoculated in order to achieve herd immunity, where the disease can no longer spread widely within the community.

Like most countries, India is also dealing with vaccine skepticism and a slew of misinformation that could potentially slow down New Delhi's inoculation efforts.

India's Health Secretary Rajesh Bhushan this week urged people over the age of 45 to register for vaccination and said during a media briefing that, "vaccine hesitancy must go." He also reportedly told the states to tighten lax coronavirus prevention measures immediately to avoid overwhelming the health-care system through a surge in infections.

Overall, India has reported more than 12.2 million infection cases since last January and over 162,900 people have died. Majority of the patients have recovered from the illness.