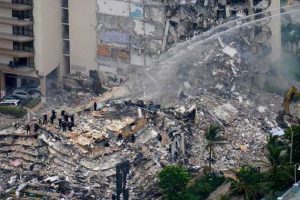 The town of Surfside posted a dozen documents to its website late Friday night relating to the collapsed Champlain Towers South, including a required 40-year inspection report that was posted as “unverified” and received 16 hours after the Florida condo building’s catastrophic failure.

“The report was not formally submitted or authorized by the property owner Champlain Towers,” the note said, adding that it was “as required by” the Miami-Dade County Code.

None of the documents, which date to 2018, appeared to contain details that would explain the beachside building’s collapse but do reveal multiple potentially serious issues.

The reports, some only a few pages long and others more than 300, range from detailed plans to permits for concrete repair to a courtesy notice reminding residents to turn off exterior lights so baby turtles wouldn’t be confused when they hatched and not make it to the safety of the ocean.

An inspection report from Oct. 8, 2018, found “abundant” cracking and spalling of the columns, beams and walls in the garage under the tower that fell to the ground early Thursday, killing at least four people and leaving 159 others unaccounted for. Spalling refers to the deterioration of concrete, sometime causing flaking and the exposure of reinforcing steel bars known as rebar.

“Abundant cracking and spalling of varying degrees were observed in the concrete columns, beams and walls” of the ground floor parking garage, according to a structural field survey report by Morabito Consultants.

It appears plans to correct these problems were not solidified until April of this year, despite the original report having been issued in October 2018.

“Though some of this damage is minor, most of the concrete deterioration needs to be repaired in a timely fashion,” the report noted.

What caused the cracking isn’t known, said John Wallace, a professor of structural engineering at the University of California, Los Angeles.

‘What will I tell my son?’ Family wrestles with missing mother and grandmother after building collapse in Florida

“It could be slow degradation over time, maybe the concrete wasn’t placed properly, it could be that the ground had moved somewhat causing it. It could be multiple different things,” he said.

Wallace, who has participated in multiple forensic analyses of building failures, cautioned there is nothing to indicate this was the cause of the collapse, merely that it warrants investigation.

The report did include photos of parking garage columns in which the concrete had cracked off and rebar could be seen.

A Sept. 6, 2018, inspection report by Frank Morabito stated no bulging or settlement was observed. However, it noted that approximately 8% of the concrete slabs in the garage and building plaza had experienced “concrete deterioration.” In addition, about 5% of the balcony structural floor slabs showed hairline cracking.

The report found additional spalling or cracking in a small percentage of concrete columns and exterior walls. One column contained a wide crack, defined as more than 2 millimeters.

Exterior plan of 8777 Collins Avenue, Surfside, Florida. The Champlain Towers South Condominium was designed in 1979, built in 1981 and collapsed in 2021. (Photo: City of Surfside, Florida)

“It appears that the concrete framed slab that supports the plaza/pool” above the garage had undergone previous patching and crack repair.

“This work has performed less than satisfactorily and needs to be completed again,” the report stated.

A document dated April 26, 2021, was titled “40 year building repair and restoration.” It includes 84 pages of what appear to be bid specifications for repair to the building. The plans were completed by Morabito Consultants and stamped in red with “in progress set 4/27/2021, not for construction.”

The bid documents also included plans for slab reinforcement and concrete and masonry repairs. It stipulated maximum load weights for the roof, floors, and plaza.

Before and after: A look at Champlain Towers South, the Florida building that partially collapsed

A permit dated May 17, 2021, for $1.1 million in roof maintenance included removing the existing roof system down to the concrete deck, priming the deck with asphalt primer, demolishing the existing stucco  and insulating and sealing the entire roof surface with hot coal tar pitch and embedded gravel.

A permit from April 27, 2021, showed that work worth $59,400 was being done to repair and refurbish roof vent fans, air conditioner disconnects and other “minor electrical work.”

Another permit, dated May 5, 2021, was for $169,473 for installation of roof safety anchors to facilitate window washing and for stucco repairs to the building exterior.

Finally, the building received a courtesy notice from the town of Surfside on May 20, 2021, telling it that building lighting was not in accordance with regulations for marine turtle protection. Lighting near beaches can draw turtle hatchings away from the sea and deter female turtles from nesting on the beach at night.

To fix the problem, the building was instructed to install tinted glass and rearrange lamps away from windows or use blinds and curtains to shield interior lights from the beach as well as turning off unnecessary lights.