Home » Business » Jobless claims fall below 400,000 for the first time since the early days of the pandemic

Jobless claims fall below 400,000 for the first time since the early days of the pandemic 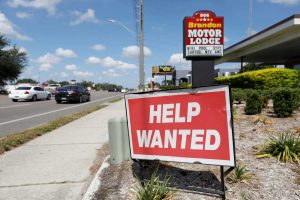 Initial jobless claims fell below 400,000 for the first time since the early days of the Covid-19 pandemic, the Labor Department reported Thursday.

The last time claims were lower was the week of March 14, 2020, with 256,000. The number spiked to nearly 3 million the following week and peaked at more than 6.1 million in early April as governments across the U.S. shut down businesses in an effort to slow the coronavirus spread.

As vaccinations have spread and businesses have been allowed to reopen, the labor market picture has improved considerably. A report earlier Thursday from ADP showed private payroll growth surged by 978,000 in May.

Despite the decline in weekly claims, continuing claims rose by 169,000 to 3.77 million. That data runs a week behind the headline claims numbers.

The jobless claims data comes a day ahead of the closely watched nonfarm payrolls report from the Labor Department. The estimate is for 671,000 new jobs after April's disappointing 266,000 at a time when expectations were for 1 million.

Though the employment data continues to improve, large gaps remain in the labor market, particularly among those at the lower end of the economic spectrum.

More than 15.4 million Americans are still receiving benefits under the various programs including two put in place specifically to address pandemic-related displacements. That total, which runs two weeks behind, is about half where it was a year ago.

The claims numbers are expected to continue their decline as more workers return to their jobs and as states curtail benefits. The federal government's extended jobless programs are set to expire in September, and they've been blamed by some for the reluctance of some workers to accept new positions.

A periodic survey the Federal Reserve conducts across its districts, released Wednesday, indicated that businesses across the country are having a difficult time finding workers to fill positions.

"The lack of job candidates prevented some firms from increasing output and, less commonly, led some businesses to reduce their hours of operation," the Beige Book report stated. The report also noted that businesses are offering signing bonuses and higher wages to attract workers but expectations are that labor supply will remain "constrained."