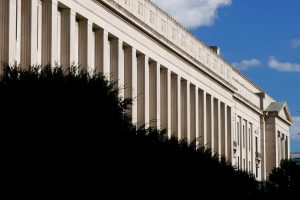 White House spokeswoman Jen Psaki said that they were not made aware of the Justice Department’s move to substitute itself in a case defending Donald Trump in a defamation lawsuit.

Journalist E. Jean Carroll had sued Trump while he was president, claiming that he lied about an encounter he had with her in a New York department store in the 1990s. Carroll claimed that Trump raped her, while he denied the claim.

In October, a lower court ruled that the Justice Department could not intervene in Carroll’s lawsuit, with the judge concluding that it “concerned an alleged sexual assault that took place several decades before he took office, and the allegations have no relationship to the official business of the United States.”

But the DOJ has moved forward with an appeal of the ruling, even though the DOJ is now led by a Biden nominee, Merrick Garland.

In the brief, the DOJ attorneys wrote that “then-President Trump’s response to Ms. Carroll’s serious allegations of sexual assault included statements that questioned her credibility in terms that were crude and disrespectful. But this case does not concern whether Mr. Trump’s response was appropriate. Nor does it turn on the truthfulness of Ms. Carroll’s allegations.”

The DOJ argued that “speaking to the public and the press on matters of public concern is undoubtedly part of an elected official’s job. Courts have thus consistently and repeatedly held that allegedly defamatory statements made in that context are within the scope of elected officials’ employment—including when the statements were prompted by press inquiries about the official’s private life.”

If the Justice Department is allowed to intervene in the case, it would raise the prospect that the case would be dismissed because of government employee immunity extended for libel and slander cases under the Federal Tort Claims Act.

The DOJ said in the brief, “Responding to allegations of misconduct falls within the category of activities that form part of any President’s office. The distasteful nature of some of the remarks here does not alter the office-related nature of the response for purposes of the scope of employment analysis.”

Carroll’s attorney, Roberta Kaplan, wrote on Twitter that it was “truly shocking that the current DOJ would allow Donald Trump to get away with lying about it, thereby depriving our client of her day in court.

“The DOJ’s position is not only legally wrong, it is morally wrong since it would give federal officials free license to cover up private sexual misconduct by publicly brutalizing any woman who has the courage to come forward,” she wrote. “Calling a woman you sexually assaulted a ‘liar,’ a ‘slut” or ‘not my type’ — as Donald Trump did here — is NOT the official act of an American president. We remain confident that Judge Kaplan’s decision will be affirmed by the Second Circuit.”