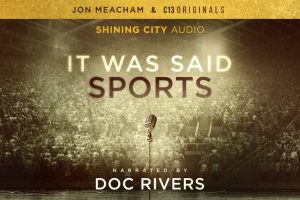 EXCLUSIVE: Pultizer Prize-winning historian Jon Meacham is working on a sports spin-off of his audio series It Was Said.

It comes after Meacham launched the studio, as revealed by Deadline, in April.

The series will feature some of the most important and inspirational sports speeches throughout history from the likes of Muhammad Ali, Billie Jean King, and Hank Aaron.

Helped by guests including Michael Strahan, Urban Meyer, and Al Michaels, it will feature Hall of Fame broadcaster Jack Buck’s “For America” poem following the 9/11 attacks, Ali’s speech in protest of the Vietnam War on April 28, 1967, King’s Commencement Speech on June 16, 2017 championing women’s rights, Florida Gators quarterback Tim Tebow’s September 27, 2008 “The Promise” speech, MLB All-Star and Atlanta Braves icon Hank Aaron’s August 1, 1982, Hall of Fame acceptance speech about the brutal racism he faced while in pursuit of the homerun crown and how he carried the torch of equal rights with grace and integrity and the powerful statement on race given by Harry Flournoy, co-captain of the 1966 Texas Western national title basketball team.

The first season will launch on September 8. Have a listen to the trailer below.

“Sports are a vital element of our lives, and of the life of the nation. The pursuit of excellence in competition is inherently dramatic and touches the deepest parts of our common story,” said Jon Meacham, Co-Executive Producer, Shining City Audio. “I’m honored to be working with the great Doc Rivers and the C13Originals team to bring these illuminating moments to life

“As a man who’s been in the arena, I’ve experienced first-hand the power and impact of the words of great sports figures of our time,” said Doc Rivers. “I’m excited to join forces with Jon Meacham and C13Originals to shine a light on these pivotal moments in history.”

“Throughout history, the powerful words of our great sports icons have transcended sports and inspired, healed, and impacted us as a world,” added Chris Corcoran, Chief Content Officer, Cadence13 and Co-Executive Producer, Shining City Audio. “As we work alongside Jon to build out the Shining City Audio slate and tell these historic stories, we’re proud to partner with Doc Rivers on this timeless series that will resonate with listeners of all generations.”