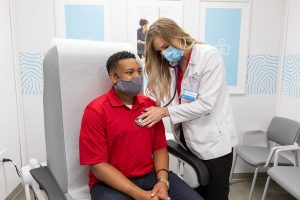 Walmart, the nation's largest employer, is joining with telemedicine firm Grand Rounds and Doctor on Demand to launch a targeted program to tackle health disparities among African American workers.

"We have nearly 300,000 Black and African American (employees) and about 50% of our workforce is comprised of people of color, so we spend quite a bit of time thinking about how do we impact and how do we create change here," said Lisa Woods, Walmart's vice president of physical and emotional wellbeing.

Walmart is part of a group of large employers, including Target, Best Buy, Medtronic and State Farm, that are spearheading a new initiative called the Black Community Innovation Coalition in partnership with Grand Rounds and Doctor on Demand. Combined, the group employs more than 500,000 African American workers.

"Obviously the events in the country over the last few years have hastened our desire to come up with a commercial grade solution," said Owen Tripp, CEO of the newly merged Grand Rounds and Doctor on Demand, noting that the Covid pandemic has put a spotlight on the serious consequences that can arise from Black health disparities.

The new program will integrate outreach and resources to address issues like Black maternal fetal health, access to primary care and behavioral health. It is building on a similar inclusive health program launched in 2020 to address the needs of LGBTQ workers, which the companies say has resulted in increased engagement.

"What we're actually doing is integrating the health-care services, navigation and advocacy of the program, all in one place … through the employee resource groups," explained Grand Rounds' Dr. Ian Tong, executive leader of the Black Community Innovation Coalition.

Grand Rounds and Doctor on Demand believes its diverse pool of doctors can help bridge the divide for workers of color who may distrust the health system.

The new initiative aims to begin offering targeted services in 2022.