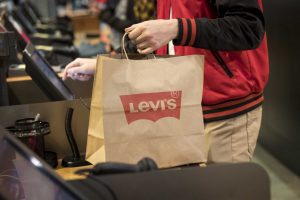 Levi Strauss & Co. on Thursday reported a double-digit sales decline for its fiscal first quarter, as ongoing store closures in Europe and lightened foot traffic in the U.S. due to the Covid pandemic weighed on results.

But the denim maker boosted its sales and profit outlook for the first half of the year, assuming the global health crisis doesn't become worse from here. CFO Harmit Singh said in an interview with CNBC that the company is anticipating sales will return to 2019, pre-pandemic levels by the fourth quarter.

Its shares jumped more than 6% in after-hours trading.

"These results point to really good evidence that we will emerge from the pandemic a stronger company," CEO Chip Bergh told CNBC. "We beat our own expectations internally [and] beat external expectations, despite having a third of our stores closed in Europe over the entire quarter."

Here's how the company did for its quarter ended Feb. 28, compared with what analysts were anticipating, based on a survey by Refinitiv:

The retailer said the double-digit drop in sales year over year was primarily due to the reduced foot traffic in its stores during the pandemic, as well as ongoing store closures in some markets where Covid restrictions have remained in place. In Europe, for example, more than 40% of Levi's stores currently are closed, with others operating on reduced hours, the company said.

Levi's wholesale revenue fell 4% during the latest quarter, marking an improvement from the prior period.

Direct-to-consumer sales were down 26%, due to fewer customers visiting Levi's stores and especially in markets that rely on tourism. The decline was partially offset by a 25% increase in the company's owned e-commerce sales during the quarter, Levi's said. Total online revenue, which includes digital sales from wholesale partners, was up 41%.

Though trends in the business are improving, earnings and sales are expected to continue to be "significantly adversely impacted" at least through the second quarter of 2021, Levi's said.

The company raised its outlook for both revenue and profit in the first half of the year, assuming that the pandemic doesn't worsen.

Sales are now expected to grow 24% to 25%, and adjusted earnings are forecast to be in a range of 41 cents to 42 cents, which implies earnings of 7 cents to 8 cents during the fiscal second quarter. Analysts had been calling for second-quarter earnings of 5 cents a share.

Levi's shares are up nearly 25% year to date. The company has a market cap of $10 billion.