Macy’s CEO, a department store veteran, fights to fit in the Amazon future of retail 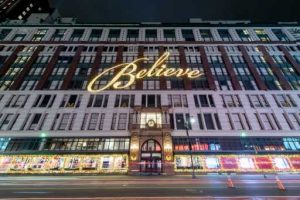 As Macy's prepares to release its third quarter earnings on Nov. 18 ahead of retail's biggest season, the most pressing in the litany of investor questions will be: Has Macy's ability to build a dot-com business inside of a legacy brick-and-mortar foundation reached its limit?

Macy's, which has said its digital sales will hit $10 billion in 2023, up from $7.6 billion in 2020, will likely say no. But given that Macy's dotcom sales have been outpacing same-store revenues for years — and that the company operates 788 stores across its portfolio — begs another question: Is Macy's current management team, led by the "quintessential department store executive," as one retail investor recently characterized Macy's CEO Jeff Gennette, the best choice for leading the nation's largest legacy department store into the new era of retail that is increasingly sophisticated, digital and dominated by digitally-native competitors like Amazon?

Both questions have dogged Macy's since October, when activist investor Jana Partners implied in a presentation to investors that Macy's could boost its valuation by spinning off its e-commerce business. Jana, with its history of pushing large retailers to shake up operations, took a stake in Macy's and soon after that presentation urged the company's board in a letter to spin off the digital arm, speculating that Macy's online arm could be worth about $14 billion, roughly twice what Macy's is valued at today.

Jana Partners won't comment on its stake in Macy's, but a person familiar with the situation said that Macy's is being urged to evaluate pursuing the same strategy followed by Saks Fifth Avenue of bringing in an investor to its dot-com business to accelerate its growth, highlight its value and better position it to attract top technology talent. This last point was underscored twice recently at Saks, first when a former Amazon exec joined the board of the new Saks.com — which is reportedly readying its initial public offering — and then over the summer, when another former Amazon executive took the COO role at the new standalone Saks Off 5th e-commerce company.

"Companies are going to be learning from people who aren't necessarily in their own swim lanes," said Bernadette Nixon, CEO of Algolia, a technology firm that helps retailers optimize their e-commerce. Nixon predicts that we'll see lots of senior executive tech talent crossing industry lines. "At the end of the day, we're in a digital world and Amazon is setting the bar, not Lord & Taylor, Saks, or Macy's," she said.

Gennette was appointed to CEO in 2017, tasked then with fixing the waning department store model which was losing ground to Amazon and purveyors of cheap fast fashion. Gennette has been with Macy's almost exclusively since 1983, when as an undergraduate at Stanford University he was hired into its executive trainee program. According to the Wall Street Journal, he rose through Macy's ranks with both merchandising and store operations experience, and made capturing millennial shoppers and bringing entertainment into Macy's stores two big goals when he became CEO.

Three decades spent at the same legacy department store likely helps to explain why he sees the retail landscape of future as more than just digital.

"To me, it's clear that a comprehensive retail ecosystem with physical stores in the best malls and the most productive off-mall locations integrated with the best-in-class e-commerce offering is a powerful combination and is moving us forward as a strong, digitally-led omnichannel business," Gennette said on Macy's second quarter earnings conference call on August 19.

Macy's stock price is up about 34% since Jana Partners first suggested a spinoff, but historically, love from Wall Street, which views Gennette as a solid brick-and-mortar guy, has been rare.

"Macy's online business doesn't get the respect it deserves," says David Swartz, an equity analyst at Morningstar Research. "It's one of the largest online retailers in the country and its valuation has not always reflected that."

Swartz says that Macy's online enhancements are working, even if it's not solving the problem of fewer people overall shopping at Macy's physical locations. The retailer announced a turnaround plan in February 2020, which includes the closing of 125 of its lowest-performing stores, the upgrading of 100 others, and heavy investment in accelerating its digital business.

Of the company's 5 million new customers that came in over the second quarter, more than 40% came to Macy's digitally, Gennette said on the earnings call. In an effort to capitalize on its most valuable customers — those who shop at Macy's both in-person and online tend to spend three times more than those who only shop at one or the other — Macy's has invested in data analytics so it can follow when and what they shop, then tailor incentive programs and product messaging to them.

Macy's is also using social media and digital messaging to try and drive people to their stores, although analysts say there are still too many locations.

"The retail landscape has been changing at a slow rate and the pandemic sped it up — there were way too many stores in the U.S.," says Jessica Ramirez, a retail research analyst with Jane Hali and Associates. "With Macy's, its square footage was ridiculous. However, there is still excitement within apparel to visit a store; you just need something to lure customers in."

The place for brick-and-mortar stores in the future of retail will be as channels for branding, say analysts. "You still have people who grew up in the late 1980s and 1990s running large companies with physical assets stuck on this idea of a physical store being a profit center, and that's no longer going to be true," says Lee Peterson, executive vice president at WD Partners, a retail consultancy. "The mentality needs to change to, physical is all about brand and online is about buy. What's going to make me really want to go to a department store?"

Making Macy's stores a destination will require innovation. Unlike higher-end competitor Nordstrom, Macy's isn't known for its cutting edge fashion brands, notes Ramirez. The company is trying to improve its trendiness, building out private label brands across all its segments. It's currently in the process of debuting Oak, a line of eco-conscious textiles and home goods. Macy's has also partnered with Toys R Us to exploit toy sales, a sector that bloomed during the pandemic and brought in new customers — millennial parents — many who came for toys then who went on to buy higher-margin goods, Gennette said on the call.

While analysts aren't so sure about the long-term growth potential of building out mini toy shops inside Macy's stores, they see lots of upside in Macy's using its stores to provide customers with additional places to pick up or return things they ordered online. Perfected by Target and Walmart during the pandemic, the idea of using physical stores for curbside pickup and other distribution efforts has been so effective that even Amazon wants in; it's likely part of the reason why it's planning on opening its own brick-and-mortar department stores. "It makes sense why Amazon wants to open stores—they're getting inventory closer to their customers," says Ramirez. "It's that last mile that everyone is fighting for."

More on Macy's and retail's future

Red flags in activist campaign to split up Macy's

Pent-up customer demand to return to stores in person post-pandemic was a big factor in Macy's stellar second quarter results — net sales rose 58.7% year over year to $5.6 billion and comparable sales were up 61.2%. Morningstar forecasts an operating margin of 7% on 36% sales growth for 2021, which would be Macy's highest since 2015. While Swartz says those margins might not be sustainable for the long term, he doesn't think spinning off Macys.com is the answer.

"This idea of splitting these businesses up goes contrary to integrating the physical stores with the dot com stores — the industry is changing in a way that there's almost no line between those two businesses anymore," he says. "Macy's whole strategy has been to try and bolster both by using them together to increase sales and reduce costs on shipping, fulfillment and distribution."

Other skeptics are questioning the long-term viability of separating Macy's two business streams, especially in a bubbly environment where some digital firms may be overvalued. "Activist investors can often be engaged in simple financial engineering and aren't thinking about shareholders but making a quick buck," says James Hoopes, Murata Professor of Ethics in Business at Babson College. "Activist investors sometimes unlock wealth and sometimes they destroy wealth."

Against the backdrop of extravagant valuations for digital businesses — only a few months after being separated financially from Saks, Saks.com is supposedly preparing for its IPO with media reports of a potential $6 billion valuation — Macy's rapidly-growing e-commerce segment is undoubtedly attractive for impatient investors. Under Gennette's watch, digital sales for Macy's grew 7.7% in 2019 and 23.7% in 2020, although investors are wary that could be cannibalizing physical store sales.

It's Macy's giant department store footprint that has investors wondering if its executive team needs a little help pivoting to a business model where its brick-and-mortar entities better serve the needs of its dot-com. But as one retail investor put it, when it comes to Gennette, "Who better to succeed in making this pivot than a person who's a dyed-in-the-wool brick-and-mortar guy? That would be one powerful message."