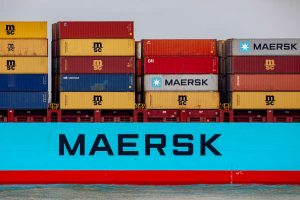 Maersk said it has secured a supply of "green" e-methanol for what it described as "the world's first container vessel operating on carbon neutral fuel."

In an announcement Thursday, the world's largest container shipping firm said Denmark's European Energy and its subsidiary, REintegrate, would set up a facility to produce carbon neutral e-methanol for use in a vessel designed to operate on it.

The plant would then produce approximately 10,000 metric tons of e-methanol used by Maersk's ship every year. The e-methanol will be made using renewable energy and biogenic carbon dioxide, with production of the fuel for Maersk slated to begin in 2023. The United States Environmental Protection Agency describes biogenic emission sources as "emissions that come from natural sources."

Henriette Hallberg Thygesen, who is CEO of fleet and strategic brands at Maersk, said the agreement with European Energy and Reintegrate puts her company "on track to deliver on our ambition to have the world's first container vessel operated on carbon neutral methanol on the water by 2023."

In simple terms, "carbon neutral" means CO2 emissions are offset by an equal amount of CO2 removal. If something is carbon negative, it means more CO2 is removed from the atmosphere than emitted.

The environmental footprint of shipping is significant. According to the International Energy Agency, in 2019 international shipping — a crucial cog in the world's economy — was responsible for approximately 2% of "global energy-related CO2 emissions."

With major economies around the world attempting to cut emissions in order to meet net-zero targets, the shipping sector will need to find new ways of reducing the environmental footprint of its operations.

In April, Brussels-headquartered campaign group Transport & Environment published a wide-ranging report on decarbonizing shipping. Among other things, it stressed the importance of sustainable fuels going forward.

"To achieve full decarbonisation of the shipping sector requires a new source of sustainable and renewable fuel," its research said.

"Fuels produced by additional renewable electricity (e-fuels or electrofuels) are the only scalable solution that fits the requirements of energy dense, deployable, and clean fuels," it added.