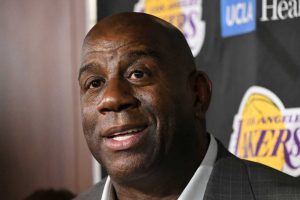 In the wake of their first-round exit from the NBA playoffs, the Los Angeles Lakers have some decisions to make as they look ahead to next season. Lakers legend Magic Johnson offered some advice to his former club on Friday regarding the status of impending free-agent guard Dennis Schroder.

"I don't think he's a Laker," Johnson said in an interview on AM 570 in Los Angeles. "That's just my opinion. I don't know if they're gonna sign him back or not. I don't think he brings the winning mentality and attitude that we need."

[email protected] on #DennisSchroder: “I don’t think he brings the winning mentality and attitude we need.” https://t.co/psbw6Y3ECnpic.twitter.com/Nb469AjiQZ

Schroder, whom the Lakers acquired last offseason from the Oklahoma City Thunder, averaged 14.3 points per game as the defending NBA champions fell to the Suns in six games.