Home » Marc Lore's next attempt to woo the affluent consumer: A fleet of on-demand food trucks 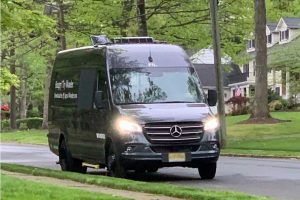 The business is still in stealth mode, but there's nothing covert about Marc Lore's latest venture for residents of Westfield, New Jersey.

Its purple and black vans congregate in the parking lot of a shuttered Lord & Taylor department store and line up across the street from a Stop & Shop supermarket. Generators hum as the vans wait to head out into the surrounding neighborhood to prepare freshly cooked meals.

After departing Walmart at the end of January, the serial entrepreneur has joined his brother, Chad Lore, to invest in Wonder, a business that is part food truck, part ghost kitchen, CNBC has learned.

Scott Hilton, a longtime colleague of Marc Lore's and former chief revenue officer of Walmart's e-commerce business, is Wonder's chief executive, a person familiar with the investment said. Chad Lore also holds a top role, while Marc is serving in an advisory capacity, said the person, who requested anonymity since the business is still in an early stage.

Marc Lore, 49, is most known for creating innovative e-commerce businesses and selling them to corporate giants like Amazon and Walmart.

He helped found Quidsi, the parent of Diapers.com, and sold it to Amazon for $545 million in 2010. Six years later, Walmart paid $3 billion to acquire his next venture, Jet.com. Lore stayed on for four years, helping Walmart by overseeing its e-commerce division and accelerating the big-box retailer's growth.

'A kitchen that comes to you'

On its app, Wonder pitches itself as a "new home dining experience with a kitchen that comes to you."

It is being piloted in the northern part of Westfield, an affluent suburb that is home to many New York City transplants. Residents often move to the close-knit town in order to trade a cramped apartment for a spacious home to raise a family. Yet it's likely that these families haven't lost their craving for the fine dining options that are a convenient perk of city life.

That's the need Wonder is trying to fill. Its vans are outfitted with mobile kitchens, and a trained chef travels on each truck, ingredients in tow, to finish off meals once the vehicle arrives at each house.

Wonder's goal is to deliver food that's still piping hot when it reaches the front door. It tackles the pitfalls of takeout like limp french fries. And its salads aren't soggy, since the vegetables were only tossed in the dressing moments before.

Jay Zuckerman, a 47-year-old father of two who resides with his wife in the pilot area, said his family has used Wonder about six or seven times for dinner over the past few months.

Each time, Wonder's chefs have placed the meal on a foldable tray table at their door, packaged in more elegant containers than one would typically receive from a delivery elsewhere.

"I thought it was such a different experience, and the timing could not have been more appropriate and needed during Covid," said Zuckerman, a fashion industry executive. "It was like ordering from a gourmet restaurant, but you don't have the issues of waiting, and you don't have the issues of the food not tasting good because of transportation. It was a very high-end experience."

And it's priced, accordingly. A dinner for four might be upwards of $100, he said.

Wonder is sourcing its menus from top restaurants headed by celebrity chefs from across the country. The company has partnered with these businesses to re-create their menus and license their restaurant concepts, according to the person familiar with how the business works.

The business' headquarters and kitchen commissary are in nearby Cranford, where Wonder's trucks stock up on fresh ingredients to prepare the meals.

Reactions on a Facebook group for Westfield moms run the gamut. Many people who say they've used the service have enjoyed it and plan to be repeat customers. But others find the inability to select a specific delivery time to be frustrating or even a deal-breaker.

Others gripe that they aren't able to order since they don't live in the limited delivery area. One member of the group joked about seeing if Wonder would deliver to a blanket in Mindowaskin Park, a nearby grassy area that is within the designated zone.

But there are complaints, too. At the top of the list is the overwhelming presence of Wonder's vans, which could be a sign that the business is ready to expand.

"I'm starting to notice the density," said Zuckerman. "I know that this is a pilot, but the density and the amount of trucks almost feels like the town has been taken over by these trucks. … All the sudden, it's like Gremlins — like these trucks are everywhere."

Some nights, the meals sell out quicker than others, leaving potential customers hungry and looking for a quick dinner elsewhere. A spokesperson for Wonder declined to comment to CNBC about the demand it is seeing and about its expansion plans.

Before the coronavirus pandemic, U.S. consumers were eating more of their meals away from home. But that behavior sharply changed when states began implementing lockdowns last year. Using their stockpiled groceries, consumers cooked their own meals. They also ordered takeout and delivery, eating their meals at the kitchen table instead of inside a restaurant.

The companies that catered to this shifting behavior saw soaring demand.

Goldbelly, an e-commerce site that ships beloved restaurant and bakery goods anywhere in the United States, told CNBC in November that its customer count had nearly doubled in 2020. DoorDash reported that its revenue for the quarter ended Dec. 31 more than tripled, and its stock soared when it debuted in December. Meal kit company Blue Apron had been struggling, posting quarter after quarter of losses, but finally in July it posted its first profitable quarter since it went public in 2017.

Industry experts and investors think many consumers will hold onto these habits, even as the country looks to exit the crisis.

Wonder could capitalize on these new routines. But it's still a challenging business. DoorDash, for example, is seeing surging revenue but remains unprofitable. And Blue Apron still grapples with how to hold onto customers, who often test out its service before ditching their memberships a few months later.

"You could see there be a bit of a decline in on-demand food services, as people feel more comfortable going into a restaurant or to order takeout," Technomic analyst Anne Mills said. "But I do think there's still demand for it, because they do meet those convenience needs."

'City of the future'

When Lore left Walmart, he told Recode he aspired to create a "city of the future."

"Imagine a city with the vibrancy, diversity and culture of New York City combined with the efficiency, safety and innovation of Tokyo and the sustainability, governance, and social services of Sweden," Lore said. "This will be our New City."

Lore declined to comment to CNBC on Wonder. It is only one of a series of projects he is working on as he builds out a portfolio of investments, a person familiar with his plans said.

He has also partnered with former baseball star Alex Rodriguez to purchase the Minnesota Timberwolves NBA franchise for a reported $1.5 billion.

Wonder appears to fit into Lore's bigger vision. It also is another attempt by Lore to cater to the needs of the time-pressed affluent consumer.

Near the start of the Covid pandemic, he invested in a business called Nines Living, which is a private membership service that offers household staffing and management, including personal chefs, child-care providers, housekeepers, tutors and drivers.

"There is a real gap in this industry and I saw an opportunity to invest in a company with a big vision to solve that deficit in service," Lore said in a blog post on the company's website.

One of his earlier ideas, Jetblack, a personal shopping service that catered to wealthy moms, didn't pan out and instead ended up being a money loser. He also helped to lead an acquisition strategy of direct-to-consumer and digital-first brands including Eloquii, Bonobos and Modcloth. Walmart later sold Modcloth, and more recently has said it will focus on incubating new brands internally.

Lore still has to prove that he can provide a service that the wealthy want — one that is also a profitable business model.

While Mills said the amount of money a food truck can make in a day varies widely, generally speaking, she said, they are a more affordable option to operate and to run than a traditional restaurant. "Still, they might not have that same revenue opportunity as a restaurant," the food-service industry analyst cautioned.

Ghost kitchens or virtual restaurants, which prepare food solely for delivery, have grown more popular. Thirty-five percent of people said they have turned to ordering from a ghost kitchen during the pandemic, more than they did before, according to a Technomic survey of 1,500 U.S. food-service users conducted late last winter.

"The pandemic increased demand for these options because it was a way to reach consumers at home," Mills said. "Food trucks kind of changed the [office park] model to set up more in neighborhoods. … There is an opportunity to gain a loyal customer base."