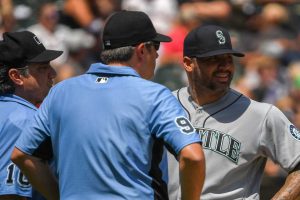 For the first time since MLB umpires began more rigorously checking pitchers for illegal substances, a player has been ejected for violating the rule.

It happened in the bottom of the fifth inning Sunday when home plate umpire Phil Cuzzi determined there was something questionable inside the glove belonging to Seattle Mariners left-hander Hector Santiago.

The game in Chicago between the White Sox and the Mariners was tied 1-1 at the time.

After he issued a walk to load the bases, Santiago was being taken out of the game anyway. However, he was officially ejected when the discovery was made and his glove was confiscated for inspection by MLB officials.

Mariners’ Hector Santiago is ejected from the game in MLB’s first foreign-substance violation since the crackdown. pic.twitter.com/0tbByrr7UO

Last Monday, MLB announced an enhanced enforcement of its rules against applying foreign substances to the baseball.

Despite a handful of complaints and a couple dramatic gestures from pitchers, things had proceeded fairly smoothly over the first week of inspections.

"(P)layers in general have been extremely cooperative, the inspections have taken place quickly and between innings," Manfred said. "Frankly, the data suggests that we are making progress with respect to the issues (in spin rate) that caused us to undertake the effort in the first place."