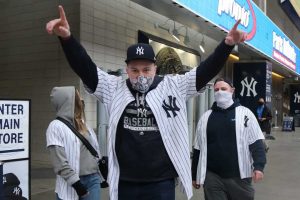 Baseball fans, rejoice. The 2021 Major League Baseball season officially begins Thursday in ballparks that will actually hold (some) fans during the regular season, a departure from the 60-game campaign MLB played last year.

This year, the plan is to play all 162. And on Day 1, all fans – no matter the expectations or predictions – hold that sense of promise that comes with every new season.

Two games have already been postponed: one due to weather, the other due to COVID-19 concerns, a reminder the pandemic will still factor into the 2021 season. Follow along here for the latest updates and highlights from the first "real" Opening Day since 2019.

With the first pitch of the Yankees-Blue Jays game in the Bronx, the 2021 MLB season is officially underway. Yankees ace Gerrit Cole set Toronto down in order in the top of the first.

Washington was set to be without five players for Thursday's game after one player tested positive for COVID-19 and four others were in quarantine due to contact tracing. Now, the game won't be played and despite a scheduled day off Friday, the earliest the teams will play is on Saturday.

Thursday's game at Fenway Park between the Red Sox and Orioles was called off due to rain and will be played on Friday, which is the exact reason for the built-in off-day following opening day.