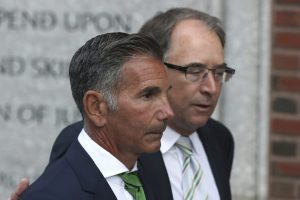 Mossimo Giannulli has been released from prison three weeks early, after pleading guilty and being sentenced to five months for his role in the infamous college admissions bribery scandal of 2019.

The 57-year-old American fashion designer, and husband of former Full House star Lori Loughlin, is now under confinement at home. Giannulli’s release to home confinement is not considered unusual, given the length of his sentence. Reportedly, he is under the supervision of a Long Beach Bureau of Prisons facility, and will be released from home confinement on the 17th of April.

Last year, Giannulli and Loughlin both pled guilty to paying $500,000, in order to get their daughters into the University of Southern California. While Giannulli began serving his sentence at a medium-security federal penitentiary in Lompoc, California this past November, Loughlin spent two months in a Dublin, CA prison, and was released in December.

Arrested on March 12, 2019, the pair were among the most well-known parents tied to the nationwide scandal. The charges against them included conspiracy to commit mail fraud and honest services fraud, with money laundering charges later following. 48 other individuals were also charged for their roles in the scandal, which involved false test scores, fake athletic credentials, and the bribing of school officials.

In Touch Weekly first reported the news of Giannulli’s release, with AP confirming his transition to home confinement.