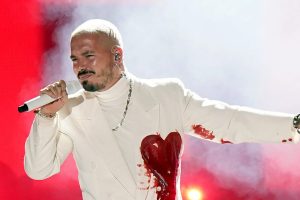 Celebrities are taking to social media to express their outrage and support of the demonstrations in Colombia that have left many people dead.

J Balvín, who’s been vocal on social media about the ongoing protests in his home country, told The Associated Press on Wednesday, via video, that he was “sad to see so many people are dying right now.”

16 protestors and one policeman have been killed in the demonstrations since last Wednesday in Bogota. That figure doesn’t include reports of deaths reported deaths in the Colombian city of Cali on Monday, which The United Nations said it is still trying to confirm.

The protests began after Colombia’s government proposed a tax plan aimed at raising $6.7 billion to pay the country’s debts and maintain a basic income scheme for 3 million low-income people that started during the pandemic.

President Iván Duque withdrew the tax plan on Sunday amid the protests and his finance minister resigned the following day, but large demonstrations and roadblocks have continued.

Numerous videos have emerged on social media showing police using excessive force during the protests and even shooting at some demonstrators point blank.

Colombian singer Maluma took to Instagram earlier this week to address his “beloved” home country, sharing a picture of the Colombian flag.

“We are living sad, painful moments,” Maluma wrote in Spanish. “Intolerance and uncertainty have taken over our lives. Therefore, I invite you to think deeply about seeking true peace and become aware that the only way out of this is tolerance and to stay strong, to stay calm, and find peace through dialogue and transparency. We need to find a way to save lives. No more deaths. No more aggression.”

‘I’m fragile’: J Balvin opens up about challenges with ‘anxiety and some depression’

Shakira, who was born and raised in the Colombian city of Barranquilla, shared a series of tweets on May 4 condemning police brutality and mourning those who have lost their lives protesting.

“It is unacceptable for a mother to lose her only child to brutality,” the singer wrote. “And that 18 other people have their lives taken from them in a peaceful protest. The bullets will never be able to silence the voice of the one who suffers. And it is essential that we are not deaf to the clamor of our own.”

“Democracy is a fight!! Me solidarizo con ustedes Colombianos!!!” Davis captioned her post. “Last week, thousands of Colombians took part in a national strike against a tax proposal from President Iván Duque Márquez. Although Duque has withdrawn the proposal, mass protests have continued against economic inequality, rising poverty, and government repression. Protesters in Colombia have been met with police violence and military suppression, and dozens of people have died with hundreds more injured.”