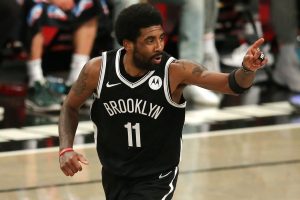 NEW YORK — Before most fans were in their seats at Barclays Center on Saturday night, Brooklyn Nets coach Steve Nash called for timeout.

The Milwaukee Bucks were up 2-0 a mere 43 seconds into the game and Kyrie Irving looked over at his bench in puzzlement. But the stoppage was needed, as Nets guard James Harden walked off the court and straight to the locker room.

The tenor of the highly anticipated Eastern Conference semifinal between the Bucks and Nets changed with Harden’s departure, and the TNT broadcast reported Harden left the arena an MRI on his right hamstring.

The sudden deviation from the Nets’ expected lineup didn’t hinder them, however, at least for one game with a 115-104 victory over the Bucks.

The Big 3 of Kevin Durant, Kyrie Irving and Harden had only played 13 games together this season — including the postseason — so after an initial Bucks flurry following Harden’s departure, the Nets were carried by Durant and Irving while Blake Griffin stepped into the top supporting role with 18 points, 14 rebounds and three assists.

The Nets took a double-digit lead late in the third quarter and maintained it throughout the relatively anticlimactic fourth quarter. Down 103-88 with 8:21 to go, the Bucks went with a small lineup of Jrue Holiday, Bryn Forbes, Khris Middleton, P.J. Tucker and Giannis Antetokounmpo to try and rev the engine — and Antetokounmpo did press the accelerator with five straight points to make it 103-93. But Durant immediately answered with four straight of his own and Irving assisted a Mike James layup to stretch the lead to 109-93.

The Bucks could not mount a rally and coach Mike Budenholzer pulled the starters with 3:40 to go after Joe Harris was left open to hit two 3-pointers to make it 115-96.

Antetokounmpo led the Bucks with 34 points on 16-of-24 shooting. He also had 11 rebounds, four assists and five turnovers. Brook Lopez scored 19 points on 8-of-11 shooting, but Khris Middleton struggled with a 6-for-23 shooting night, scoring 13 points. He also pulled in 13 rebounds. Jrue Holiday had 17 points on 7-of-19 shooting to go with nine rebounds and six rebounds.

The Bucks shot just 44.6% from the field and a woeful 6-for-30 (20%) from behind the 3-point line. The four-man bench of Forbes, Bobby Portis, Pat Connaughton and Jeff Teague contributed for just eight points before the starters were pulled.

Irving and Durant carried a heavy load for Brooklyn, as Irving played 45 minutes and scored 25 points and had eight assists. Durant played 40 minutes and had 29 points. Harris added 19 points while Mike James had 12 off the bench.

The @BrooklynNets will look to go up 2-0 on Monday at 7:30pm/et on TNT. #NBAPlayoffs#ThatsGamepic.twitter.com/DuLlYlGpGX

The Bucks dominated inside, scoring 72 points in the paint to the Nets’ 48 and 20 points off 15 offensive rebounds. The Nets counteracted with 15 3-pointers and shooting 50% from the floor until the final moments of the game.

The Bucks never could find their shooting touch, either at the start of the game or out of the half. Their chilled fingers made just one of their first eight shots, which allowed the Nets to take a 70-63 lead in the opening three minutes of the third quarter.

The Nets gradually pushed that margin to 83-73 with a 9-2 run in the middle of the quarter. The Bucks cut it to 86-80, but after Antetokounmpo missed two free throws Irving hit a momentum-turning 3 to make it 89-80. Landry Shamet then put down a dunk following an Antetokounmpo turnover to put the Nets up 91-80 and Durant stretched the lead to 16 with five straight points late. A Lopez buzzer-beater made it 98-84 after three.

Through three quarters, the Bucks had made just four of their 23 3-point attempts, while the Nets were 12-for-31.

The Nets rallied from Harden’s early exit to take a 63-61 lead into halftime on the strength of 20 points from Irving and 10 points and six rebounds from Griffin. The Bucks shot just 21.1% from behind the 3-point line in the opening half but scored 42 points in the paint and 11 points off 11 offensive rebounds.

Antetokounmpo had 19 points, followed by Holiday with 12 and 11 from Lopez. Middleton scored eight on 4-of-12 shooting.