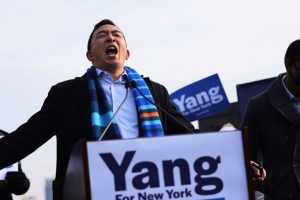 Andrew Yang’s pitch to New Yorkers during his run for mayor has been mostly about his cheerful attitude. He wants to make New York City fun again; he wants to make it a hub for Bitcoin; he wants to lure residents by showing people we’re super nice and a really good time.

But that’s not what the city needs right now. We do not need a human high five. New York effing City does not need a grinning Walmart greeter at the Lincoln Tunnel. What we need is someone who is equipped to do one of the hardest jobs in the world, at one of the hardest times in our history. We need someone who knows how to pull the levers of government to confront complicated problems that have been piling up for decades and made worse by the coronavirus pandemic — problems with housing, education, transit, and inequality.

Yang has no experience in government, let alone the kind needed for the office of New York City mayor — a massive job that involves managing more than 320,000 civil servants (including more than 50,000 people in the police department), negotiating with a 51-person city council, and addressing the needs of five borough boards and 59 community boards. The job also requires constant confrontation with Albany’s finest and our state government’s Bowser, Gov. Andrew Cuomo.

Yang did not vote in New York City’s mayoral elections from 2001 to 2017 before despite living here that whole time. That isn’t surprising, as a lot of New Yorkers treat this place like a hotel — sometimes for their entire lifetime — but they don’t run for mayor. Yang’s lack of interest is an indication that this job is a failed presidential candidate’s consolation prize, and this city is no one’s consolation prize.

It’s also important to note that Yang will not rule out running for another office while he holds the title of Hizzoner — not that that has worked for politicians in the past (See: Rudy, Mike, and Bill). It has, however, managed to thoroughly embarrass our city.

Yang has said he will hire people with actual experience in city government, specifically his fellow candidate Kathryn Garcia, to help him do the job. In that case, I do not see why he is necessary in any capacity aside for clapping for Ms. Garcia while she puts her experience as former commissioner for the New York City Sanitation Department, CEO and chair of NYC Housing Authority, and food zzar for New York’s emergency food program during the COVID-19 emergency response to good use.

So what is he running to do? Andrew Yang is running to be a mascot, but we’ve already got plenty of those — Lady Liberty, the Chrysler Building, the Empire State Building, Fran Lebowitz, rats strong enough to carry a slice of pizza, pigeons who will mug you. We have mascots. We do not need Andrew Yang.

There are some people who support Yang because he’s a “successful businessman” or “job creator,” but a closer look at his résumé doesn’t bear that out. His most successful job was running Manhattan GMAT, a test-prep company. He got that job because he was a friend of a friend of the founder. Yang then promised to create 100,000 jobs through a program he helmed called Venture for America. A New York Times analysis found that it created 150 jobs.

If you are a person who wants a successful businessman candidate, you may want to look instead at Ray McGuire. He left his position as an executive at Citigroup to run for mayor. Climbing the ranks at a Wall Street bank requires both political and business acumen. It is difficult to move up at these huge institutions for anyone, it is even more difficult to do it as a Black person.

Some people like Yang because he’s promised a form of universal basic income, giving out $2,000 a year to New Yorkers “living in extreme poverty.” Not only would this not lift any family out of extreme anything, but Yang wants to cut social programs to fund this program, which may hurt the very people he intends to help. The point of UBI is to give people enough money to live off of; I do not see how this version of Yang’s UBI idea achieves that goal.

If you are a person who is interested in candidates with detailed plans, maybe check out Maya Wiley — a civil-rights activist, former head of the Civilian Complaint Review Board and former counselor to Bill de Blasio. She has a lot of detailed plans, such as one to create community centers that act as daycare facilities for children and older adults.

Name it, we got it

New York City does not need a whacky inflatable balloon human pumping crypto and singing the city’s praises to attract people to this place. The people are already coming, and they’re already here. Besides, being eager is very much not our style.

“My opinion of Andrew Yang is that he’s trying too hard, and that automatically makes New Yorkers suspicious,” Charlotte Cowles, a hater of try-hards who has lived in New York since 2003, told me.

That “try hardness” is a form of desperation some people are feeling in this moment, and it’s the wrong kind. It’s the kind of desperation that’s felt in this city by all the people who are terrified about everyone who left. They fear Gotham will never be a glitzy metropolis again — that some other place will be a “concrete city where dreams are made of,” or whatever. They are thirsty. And they are doing too much. New York City cannot be replaced.

Instead we should be focused — not on what our city looks like to the outside world but on what its people need. And it’s hard to really know what that is for a wealthy New Yorker with no experience in public service — who seems to have never paid even the slightest bit of attention to city politics — like Andrew Yang. You can try, sure, but anything you learn in a few months on the campaign trail will never match the decades of service that some of his opponents — like Scott Stringer, who has been the city’s comptroller and Manhattan borough president — have given to this city.

There are mayors who need to be hype men. The mayor of Miami, for example, is also pumping crypto and will not stop talking about how many people from elsewhere (especially New York) are moving to his city. (US Postal Service data indicates that 9% of Manhattanites who moved from the city moved to Miami-Dade or Palm Beach counties last year, up from 6% — but Miami needs that hype, so we’re going to be gracious and let them have it.)

Needless to say, New York City is not Miami. The problems we have won’t necessarily be solved by adding to the headcount of the financial-services industry. Our next mayor needs to focus on making this city more livable for average people. That means understanding the city we have and knowing how improve and expand services. This is the nitty-gritty of government, and it requires a talented, experienced mayor — not a mascot, not Andrew Yang.