Home » Business » One shocking chart shows used-car prices jumping another record amount in May, highlighting the strange gaps in the economy's recovery

One shocking chart shows used-car prices jumping another record amount in May, highlighting the strange gaps in the economy's recovery 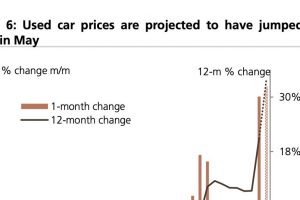 If you’re in the market for a used car, be prepared for some sticker shock. Prices are projected to have skyrocketed again in May, and that boom is probably going to be a primary driver of increased inflation.

A note by a group of UBS researchers, led by Alan Detmeister, forecast a 10.8% price increase. That’s even higher than April’s record-breaking surge of 10%. 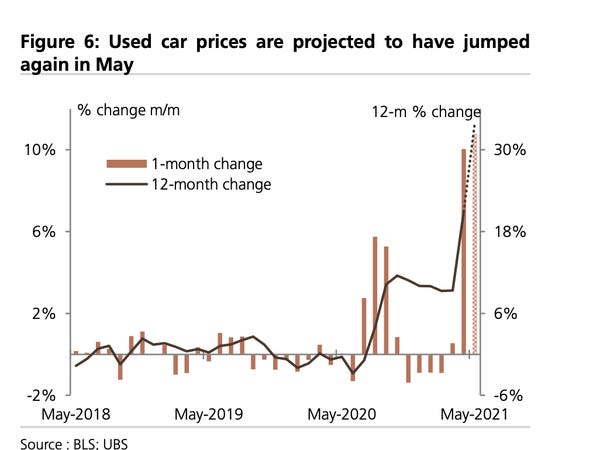 Those pre-owned cars are adding significant mileage to inflation in the US. UBS projects that core Consumer Price Index (CPI) will have another “massive” rise in May; simply put, that means things got even more expensive. That follows a 13-year high in April. In both April and May, the increase is “heavily driven” by used car prices, according to UBS.

Used cars are just one of a myriad of shortages throughout the US economy, part of the country’s strange rollercoaster of a recovery. A global computer-chip shortage has wreaked havoc on the automotive industry, potentially costing it up to $110 billion just this year, Insider’s Dominick Reuter reported. Those chips are used for everything from car engines to Bluetooth capabilities. That’s slowed production of new cars — right when Americans are itching to buy them, as Insider’s Katie Canales reported.

“With pressures on the used car market, along with returning demand for travel, we expect further increases in these categories in the coming months,” the UBS researchers write. They also expect “solid” price increases for new cars and apparel.

Another shortage could be holding up economic recovery

Last week brought the May jobs report, which tracked payroll gains for the month. It showed signs of labor-market acceleration, as Insider’s Ben Winck reported, with the unemployment rate dropping. However, the number of payrolls added came in below expectations.

A separate UBS note from researchers led by Andrew Dubinsky said jobs are rebounding slower than expected because of shortages — “temporary labor supply bottlenecks implied by strong wage gains are slowing growth.” For instance, the youngest workers, who are 16 to 24, saw declines, which UBS attributes to them potentially returning for in-person schooling.

So something else is getting more expensive: The amount that workers get paid. Employers are forking over more money to try and get workers to join their workforce.

As the UBS researchers write, “Annualized leisure wage growth of around 20% in the past three months suggest the recovery is being held back by labor supply.” That wage growth signals that labor-market-supply issues will be temporary, UBS said.

But it’s not just a matter of wages keeping people out of the workforce. Some unemployed workers are rethinking work and what they want out of it, while others struggle with a labor mismatch — the jobs that are open don’t necessarily fit with their skills, or previous experience. Despite all of that, it doesn’t appear that increased unemployment benefits kept workers from returning in May. In 25 GOP-led states, governors have prematurely announced an end to federal benefits to get workers back, but, as Insider’s Ayelet Sheffey reported, they returned regardless.

And, of course, there’s still an ongoing pandemic. UBS, which is “optimistic” about labor force participation in the coming months, notes COVID fears may subside. That’s one factor that may have been keeping older workers from returning.