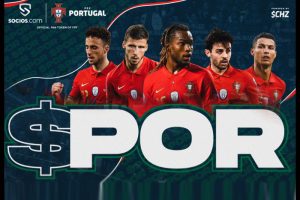 The Portuguese Football Federation has inked a deal to this effect with blockchain platform Socios.com and Malta-based esports voting platform ChiliZ.

Portugal will launch the $POR Fan Token in the next few days, providing fans across the world with a powerful new way to influence and engage with the team. The first $POR Fan Tokens will be dropped to existing Portuguese users on the Socios.com app ahead of the full launch of the Fan Token.

The $POR Fan Token will be launched and go on sale in the next few days in a Fan Token Offering (FTO) on fan engagement and rewards app Socios.com and Chiliz.net, the world’s first tokenized sports exchange. The fans can purchase the token directly through their mobile phone via the Socios.com fan engagement app.

The $POR Fan Tokens can be used by Portugal fans to access to voting rights in polls, VIP rewards, exclusive promotions, AR-enabled features, chat forums, games and competitions on Socios.com.

Portugal is the reigning European Champions and has also won the inaugural UEFA Nations League in 2019. They became the 40th major sporting organisation to join Socios.com’s elite global network.

Some of the other teams on the platform include Spain’s La Liga soccer clubs Atlético de Madrid and FC Barcelona as well as European league clubs, France’s Paris Saint-Germain, Italy’s Juventus and AS Roma as well as UK’s West Ham United and Argentina’s Club Atlético Independiente.

Portugal Captain Cristiano Ronaldo and five other team members are already members of league clubs that are associated with Socios.com.

Fan Tokens for Paris Saint-Germain, Juventus, AS Roma and Galatasaray have already been listed on world-leading crypto exchanges, including Binance. Fan Tokens have generated $150 million for clubs and partners in 2021 alone and look set to become a powerful new revenue stream for the sports industry.

The Fan Token will help expand the teams’ global fan engagement strategy and their global audience by bringing fans closer to the team. Meanwhile, Socios is expected to benefit from a wide range of marketing rights including in-stadium, TV and digital exposure.

Socios.com is powered by ChiliZ, which allows both esports and sports entities to tokenize their voting rights to their fan bases to crowd-manage sports and esports organizations.

The $POR Fan Token will be tradeable against the Socios.com platform’s native token, ChiliZ ($CHZ), with the fans needed to purchase ChiliZ tokens to exchange into Fan Tokens through a process known as a FTO.