Salesforce launches a new employee initiative focused on Black women after former workers publicly slammed its culture, as its diversity numbers creep up 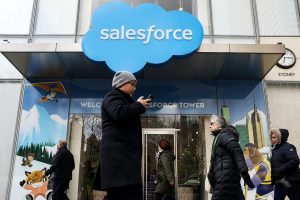 This announcement comes a few months after Salesforce faced criticism about its culture and diversity and inclusion efforts from two former employees who publicly posted resignation letters. Cynthia Perry and Vivianne Castillo — both Black women and former managers at the firm — each cited “microaggressions” in their letters.

In their letters, both also noted that while the cloud software giant publicly professes to value equality, the internal reality often falls short for Black employees or those from other underrepresented groups, a criticism that some current and former Salesforce employees also previously raised to Insider.

Salesforce has been a vocal advocate for social change, proactively closing gender and racial pay gaps and hiring a chief equality officer in 2016. However, it has struggled to diversify its employee base, and has low percentages of employees from underrepresented groups, squarely in the middle-of-the-road compared its tech peers.

Salesforce attributed the progress to new hiring initiatives, like a diversity recruiting team formed last year and a new referral program for underrepresented groups, but said that hiring was just the first step.

“While we’ve made strides in hiring, we recognize the need to focus on the experience once our talent arrives,” Salesforce’s blog said. “We are working to create a culture where underrepresented talent doesn’t just exist, they thrive.”

In addition to a strategy focused on supporting Black women employees, Salesforce said it is building a company-wide training by partnering with a Black-owned vendor to address microaggressions impacting underrepresented communities at the company.

It has also expanded existing and built new mentorship and leadership development programs for underrepresented groups including Black, Asian, Latinx, and Indigenous employees.

Do you work at Salesforce? Contact this reporter via email at [email protected] or Signal at 925-364-4258. (PR pitches by email only, please.)