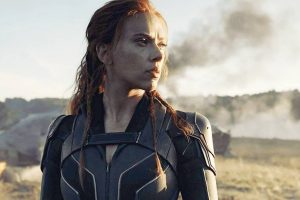 Marvel star Scarlett Johansson and the Walt Disney Company have settled the breach of contract lawsuit the "Black Widow" actor brought against the studio in July.

"I'm very pleased that we have been able to come to a mutual agreement with Scarlett Johansson regarding 'Black Widow," said Disney Studios chairman Alan Bergman in a statement. "We appreciate her contributions to the Marvel Cinematic Universe and look forward to working together on a number of upcoming projects, including Disney's 'Tower of Terror.'"

The explosive suit claimed that Disney had breached Johansson's contract it released "Black Widow" on its streaming service Disney+ at the same time it debuted in theaters. Johansson argued that the company had guaranteed an exclusive theatrical release for her solo film, and her salary was based, in large part, on the box office performance.

"I am happy to have resolved our differences with Disney," Johansson said in a statement. "I'm incredibly proud of the work we've done together over the years and have greatly enjoyed my creative relationship with the team. I look forward to continuing our collaboration in years to come."

Lawyers for Johansson and Disney spent months slinging barbs at each other. Disney accused the actor of "callous disregard" for the dangers of Covid-19 to the moviegoing public and publicly revealed she had bee paid $20 million for the film already.

Johansson's lawyers said Disney's comments were "an attempt to make her appear to be someone they and I know she isn't."

The back-and-forth led Jamie Lee Curtis, Blumhouse's Jason Blum and Marvel's own "WandaVision" star Elizabeth Olsen to come to Johansson's defense. Even the president of the Screen Actor's Guild on Friday slammed Disney for "bullying" Johansson in a public statement.

While it's unclear what Johansson was paid in the settlement, the star seems to be willing to put the lawsuit behind her. Johansson is expected to work with Disney on the upcoming "Tower of Terror" reboot based on one of Disney's most popular attractions.